The primary treatment of apparent early stage endometrial cancer (EC) is hysterectomy with bilateral salpingo-oophorectomy allowing the definition of disease on the basis of histology, grading, lympho-vascular space invasion (LVSI) and depth of myometrial invasion.

More than 90% of cases EC are diagnosed at early stage with a risk of nodal metastases <1% in “low-risk” population, according to Mayo Clinic criteria (grade 1 or 2, myometrial invasion <50%, and tumor diameter <2 cm) compared to a 16% for intermediate risk endometrioid adenocarcinoma (myometrial invasion ≥50%, and tumor diameter ≥2 cm), and 20–40% for high-risk cases (endometrioid grade 3, clear cell, serous, and carcinosarcoma) (1).

It is also not to be overlooked the possibility to identify metastases in low-risk patients and the increased detection rate of low volume metastases by ultra-staging.

SLN biopsy was first described for EC by Burke et al. (MD Anderson Cancer Center) in 1996 (5). Further single and multi - institution series described the feasibility and the high detection rate of the technique. The wide experience of Memorial Sloan Kettering Cancer Center contributed to develop the technique, introducing the SLN biopsy algorithm as part of routine surgical staging, bringing about the publication in 2017 of the SGO (Society of Gynecologic Oncology) Consensus recommendations, although there aren’t randomized controlled trial yet (6).

Indocyanine green (ICG) was the most commonly used tracer in different series; cervical injection of this tracer has been shown (7) to result in significant higher bilateral pelvic detection rate compared with uterine injection (75% vs. 51%), thereby avoiding a technically complex hysteroscopic peritumoral or transabdominal fundal injection. In 2017 FIRES study (8), a multicentre, prospective, cohort study showed that, in early stage EC of all histologies, SLN identified with ICG has a sensitivity of 97.2% (95% CI: 85–100), and a negative predictive value of 99.6% (95% CI: 97.9–100), suggesting that such a procedure can safely replace systematic lymphadenectomy.

The tracer ICG is a sterile lyophilized green powder; it is a water soluble, tricarbocyanine dye with peak spectral absorption at 800 nm. Following intravenous injection, ICG is mostly carried by albumin, is pick up by the hepatic cells and secreted into the bile. Based on these characteristics ICG has become indicated in determining cardiac output, hepatic function, liver blood flow, and in ophthalmic angiography. The use of this drug in lymphatic mapping is still off-label.

ICG contains sodium iodide and should be used with caution in patients who have a history of allergy to iodides.

Near-infrared imagers are filtered to receive the wavelength emitted by ICG and are available for laparotomy, laparoscopy, and robotic surgery; for robotic surgery it is available on the da Vinci Si or Xi surgical robot platforms (Intuitive Surgery, Sunnyvale, CA, USA) with the Firefly fluorescence imaging technology.

The Firefly mode, activated at the surgeon console, allows to navigate with real-time, fluorescence-guided identification of lymphatic channels and SLNs during dissection.

The dose of 0.5 mg/mL is created by a step by step dilution:

ICG tracer is injected into the cervix after anesthesia induction and preparation of surgical field; after injection, pneumoperitoneum and port placement, side docking is performed to allow an easy access to the cervix in case of re-injection. The first surgical step is peritoneal evaluation and washing for cytological examination. Fluorescence imaging is used for transperitoneal visualization of ICG tracer in the lymphatic channels. In obese patients the transperitoneal evaluation is often negative therefore in these circumstances it is indicated to carefully develop the retroperitoneal spaces with care to not damage the lymphatic channels to avoid ICG spillage that can interfere with SLNs identification.

A successful mapping is defined by observing a channel leading from the cervix directly to at least one lymph node in at least one hemi-pelvis.

SLN is the first-in-chain nodes closest to the site of injection that has the highest likelihood of containing metastatic disease as it is the first to receive lymphatic drainage from the tumor.

SLN communicates with subsequent nodes along the same lymphatic channel pathways and that are defined upper echelon nodes.

We can recognize two common major lymphatic pathways of the uterus:

In Persson’s algorithm (10), it is mandatory to identify both pathways in each hemi-pelvis to declare the success of the procedure. Persson also divides the SLNs into three categories:

NCCN algorithm (9) states that all mapped nodes must be removed, however in our algorithm only the first-in-chain node for each hemi-pelvis is removed for each pathway when identified.

It is recommended switching frequently the fluorescence imaging into the real imaging to recognize correctly all anatomical landmarks for the dissection. According to the SLN level, is necessary to gently develop the retroperitoneal spaces (para-rectal space, para-vesical space and obturator fossa) without damaging, as much as possible, the lymphatic channels.

To define the procedure as technically successful it is mandatory a bilateral detection at least of one of the two pathways (Video 1).

In case of unsuccessful uni- or bilateral SLN identification, an ipsi- or bilateral re-injection of ICG is performed with a minimum of 10 min’ observation time to allow the detection of the missing lymphatic pathways. Moreover all suspicious nodes must be removed regardless of mapping.

In our algorithm side specific pelvic lymphadenectomy (PL) in case of reinjection failure is mandatory only for intermediate or high risk tumor according with ESMO-ESGO guidelines classification (endometrioid G3, G1-G2 >50% myometrial invasion or non endometrioid histology). In these cases intraoperative macroscopic evaluation of myometrial invasion is performed by the pathologist. Frozen section of SLNs is not performed to not impair ultra-staging and therefore micro-metastases and isolated tumor cells (ITCs) detection and moreover in case of metastatic node we would not complete full lymphadenectomy.

However intraoperative pathological evaluation of SLN may be necessary to make sure of the presence of lymphatic tissue in the specimen, especially in case of obese patients.

In case of undetected bilateral pelvic (P) lymph-nodes is mandatory to explore para-aortic (PA) area to detect a real I level PA SLN, in order to identify a potential skip metastasis.

In NCCN algorithm (9) it was suggested the possibility to omit PA lymphadenectomy (PAL) in case of technical difficulties or in patients with low risk factors for PA nodal metastases.

In our algorithm no PA SLNs excision is performed if mapped PALN are II level LN, even for high risk tumor and no systematic PAL is recommended, unless suspicious, since adjuvant treatment is based on pelvic SLNs status and tumor risk factors (Figure 1). 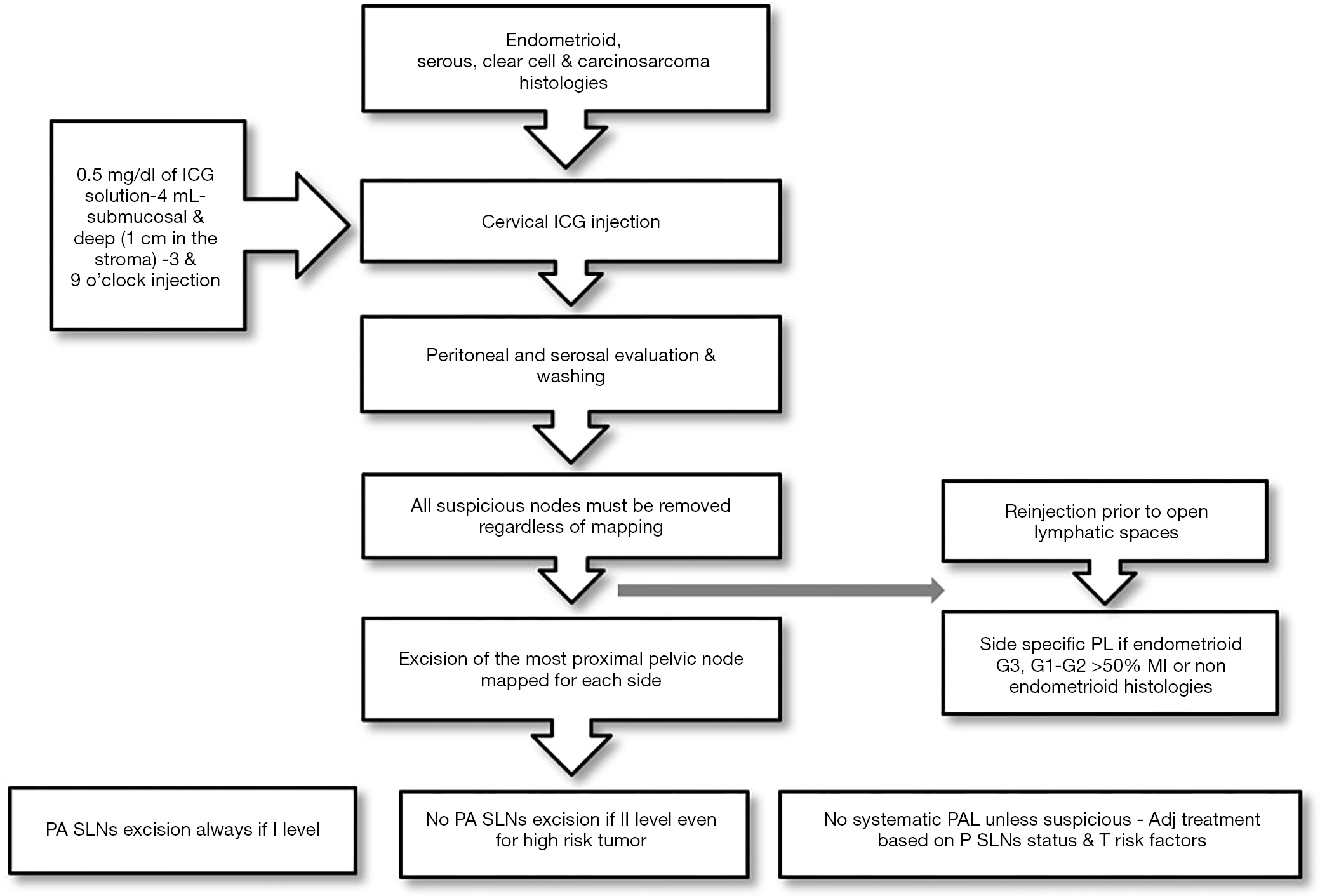 SLNs are put in separate containers which are immediately labelled according to the different anatomical sites and handled separately in the pathology department. They are identified on palpation and dissected leaving peri-nodal adipose tissue for assessment of extra-nodal extension. Small lymph nodes up to 5 mm are embedded whole, those between 5 to 10 mm are bisected, the larger nodes are sliced in parallel slices at 3 mm interval, perpendicular to the long axis of the node. Paraffin blocks in dedicated (gray) colored cassettes are cut for ultra-staging at 3 levels at 50 microns, with two sections for each level, which are stained with hematoxylin & eosin and with immunohistochemistry using the anti-cytokeratin AE1/AE3 (Ventana Medical Systems, Inc., Tucson, AZ) for a total of 6 slides per block. Ultra-staging is performed as defined in the breast cancer literature by the American Joint Committee on Cancer. Macro-metastases are defined as metastases larger than 2.0 mm and micro-metastases as microscopic cell nests larger than 0.2 to 2 mm or less; ITCs are defined as metastatic carcinoma in the form of microscopic clusters and single cells measuring less than 0.2 mm.

SLN mapping algorithm has now replaced systematic PL and PAL in the management of apparent early EC. In a multicentre prospective trial ICG technique appeared feasible and reproducible, the accuracy reached the 99% of cases, with a false negative rate of 3% (8).

The recommendations (6) to ensure the optimal results of SLN mapping are:

Any potential microscopic residual disease in P an PA non SLNs is assumed to be cured by systemic adjuvant therapy.

There still are several challenges to face and solve, therefore a few randomized trials are under evaluation to study survival outcomes, to define the clinical significance and adequate treatment of low volume metastatic disease detected by ultra-staging and to evaluate the morbidity of SLNs excision compared with more comprehensive lymph nodes dissection.

Answer: the patients undergo diagnostic hysteroscopy to confirm histology and grading, CT scan of the Chest and Abdomen to evaluate lymph node involvement or distant disease and MR of the pelvis to evaluate depth of myometrial invasion. In case of intraoperative macroscopic evaluation the pathologist is required to specify myometrial infiltration and volume of disease, grading is usually available preoperatively and it is not reliable when performed on frozen section.

Answer: the SLN detection rates with ICG and the bilateral SLN detection rates, from the data of the literature, appear comparable or better than those of blue dye only or radiocolloid with a significantly shorter learning curve and a no need for preoperative Lymphoscintigraphy in case of radiocolloid. Fluorescent SLN localization with ICG is currently the preferred mapping approach at our institution and at many institutions worldwide.

Conflicts of Interest: All authors have completed the ICMJE uniform disclosure form (available at http://dx.doi.org/10.21037/gpm-20-36). The series “Robotic surgery for benign and malignant gynecological diseases” was commissioned by the editorial office without any funding or sponsorship. The authors have no other conflicts of interest to declare.