Endometrial cancer is the most common gynecologic malignancy. The mainstay of treatment for endometrial cancer (EC) is total hysterectomy with bilateral salpingo-oophorectomy (1,2). In recent years sentinel lymph node (SLN) mapping has emerged as an attractive investigational approach for the treatment of this neoplasia. In fact, because radical lymphadenectomy may have no therapeutic benefit in patients with early-stage EC who have low probability of lymph node involvement (3); subsequently, SLN mapping may decrease unnecessary lymph node dissections (4). Recently, the number of minimally invasive procedures for gynecologic oncology has risen, with the frequency of robotic procedures showing a marked increase (5). The aim of this video is to describe the use of this tool and the technical outcomes (e.g., rate of detection, main localizations) of SLN dissection during our single-center experience in the robotic surgical approach of patients with early endometrial cancer.

During our robotic experience using the da Vinci Xi™ platform (Intuitive Surgical Inc., Sunnyvale, CA, USA) immediately after the anesthesia and the robotic docking and prior to the insertion of a uterine manipulator, 4 mL of indocyanine green (ICG) 1% dye were slowly injected superficially (0.1 cm) and deeply (1 cm) into the cervix at the 3 and 9 o’clock positions by a spinal needle.

The INIF imaging system is a tool developed to detect the fluorescent light from ICG through a robotic-assisted surgical approach. Specifically, its equipment includes a fluorescence-capable illuminator, a camera head, and an endoscope. Other systems with similar function have been developed for conventional laparoscopy. The INIF image system enables rapid conversion from the normal robotic view to that for detecting fluorescent ICG, and this procedure can be promptly completed by holding the camera control pedal at the console and then sliding the finger switch. Moreover, it affords the ability to maintain the usual visualization without any dye in the field (unlike isosulfan blue) and thus enables direct visualization of the SLN (in contrast to radioisotope, which requires a Geiger counter inserted into the field).

At the beginning of the surgical procedure, the pelvis was carefully evaluated, and a peritoneal washing was obtained; then, an accurate dissection was performed by opening the pararectal and paravesical spaces (Figure 1). Various nodal regions (e.g., the external iliac, obturator, and presacral regions) were explored for identifying the fluorescent SLN (approximately after 20 min after the tracer injection) by the INIF camera. The SLNs of both pelvic sides were removed (Figures 2,3) in order to be histologically evaluated according to the standardized ultra-staging protocol (6) (Figure 4). 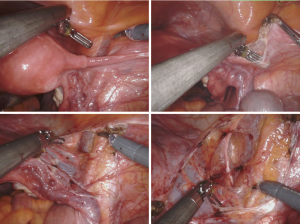 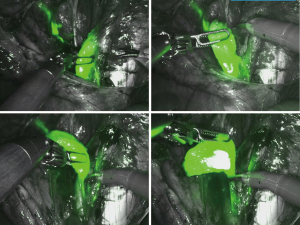 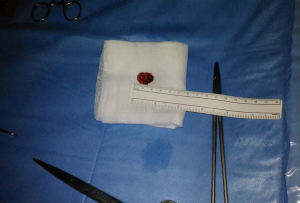 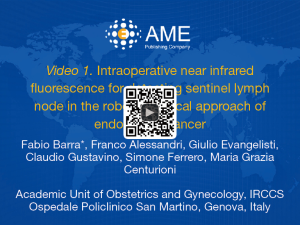 Our experience in lymphatic mapping and SLN detection by INIF during robotic-assisted laparoscopy for treating patients with EC was favorable. Overall, we performed the procedure in 36 patients with apparent uterine-confined disease at preoperative imaging (MRI) and a previous biopsy demonstrating endometroid histology. A total of 95 surgical specimens suspected to be SLNs were extracted and sent to pathological evaluation; 92 specimens (96.8%) had a certain pathological diagnosis of nodal tissue, and thus were mapped for side and specific localization. Overall, 49 (53.3%) SLN specimens were removed from the left side, and 43 (47.7%) were removed from the right side. The SLNs were most commonly identified by surgeons in these two locations: the external ilium (n=45/92, 48.9%) and the obturator/internal ilium (n=23/92, 25.0%) (Figure 5). We identified at least 1 SLN in 94.4% of the subjects (n=34/36), whereas a bilateral mapping was successful in 86.1% of the subjects (n=31/36); the mean time to identify an SLN was 23.4 min (range, 8–47 min). There was no significant difference in the surgical time for extracting the SLNs from each pelvic side (P<0.001). 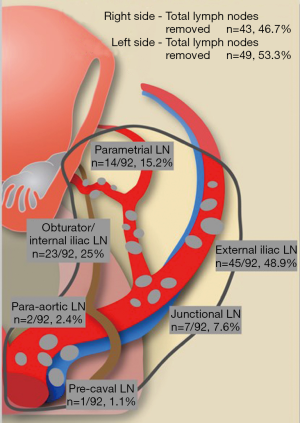 In conclusion, this technique has been demonstrated to be feasible, safe, reliable, and time efficient, allowing for the identification of SLNs with elevated detection rates in this setting.

Conflicts of Interest: All authors have completed the ICMJE uniform disclosure form (available at https://gpm.amegroups.com/article/view/10.21037/gpm.2019.12.06/coif). The series “Award-Winning Videos from the First International Elite Gynecologic Surgery Competition (2019 Masters of Gynecologic Surgery)” was commissioned by the editorial office without any funding or sponsorship. SF serves as an unpaid editorial board member of Gynecology and Pelvic Medicine from Oct 2018 to Sep 2020. The authors have no other conflicts of interest to declare.

Ethical Statement: The authors are accountable for all aspects of the work in ensuring that questions related to the accuracy or integrity of any part of the work are appropriately investigated and resolved. All procedures performed in studies involving human participants were in accordance with the ethical standards of the institutional and/or national research committee(s) and with the Helsinki Declaration (as revised in 2013). Informed consent for use of patient data for scientific purposes was obtained from all the patients who were enrolled in the surgical procedure.