Cervical cancer ranks fourth in the world in female malignancies. In 2015, about 270,000 patients died, 90% of which occurred in low- and middle-income countries (LMIC), with a mortality rate about 18 times greater than developed countries (1). The results of most previous studies on the treatment of cervical cancer are similar, and it is believed that laparoscopic surgery and open surgery have the same efficacy, and laparoscopic surgery has a short hospital stay, less blood loss, faster recovery time and fewer postoperative complications. Last year, one prominent study showed a comparison of routine surgical options for early cervical cancer (2). It was found that minimally invasive radical hysterectomy had a higher recurrence rate and a lower survival rate than open abdominal radical hysterectomy, which can be described as shocking and subversive. Since laparoscopic surgery is widely used in Mainland China, Chinese obstetrics and gynecology experts designed the study to follow Ramirez, who did the laparoscopic and open surgery as a true world study on early cervical cancer and found that we should continue to improve the operation and the technology of laparoscopic surgery. 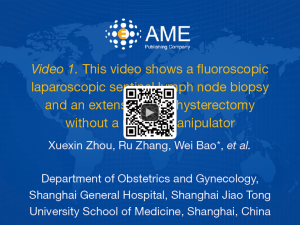 For this patient, we performed radical cervical cancer hysterectomy with the laparoscopic multi-hole method and sentinel node removal with fluorescent laparoscopy. Sentinel lymph node is the first station of lymph node metastasis, and it is also the earliest metastasis lymph nodes. First, 0.5 mL ICG was injected into the cervical clockwise clock at 3 and 9 o’clock after a conventional disinfection towel. After 5 minutes, bilateral internal iliac lymph nodes were developed first (Figure 2A), the right side of the peritoneum was opened, and the sentinel lymph nodes developed at the intersection of the external iliac, and internal iliac vessels were removed (Figure 2B). Similarly, the left internal iliac sentinel node was taken for biopsy.

The key to uterine artery ligation is to identify its anatomical location and dissociate it (Figure 4). 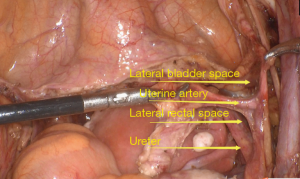 The ureter is an especially important structure in radical cervical cancer surgery. Its dissociation and protection is the key to extensive total hysterectomy (Figure 5). 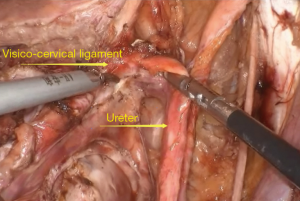 Break off the cervix uteri

No uterine manipulator was used during the entire procedure of a broad hysterectomy, and it is entirely dependent on the coordination between the assistant and the doctor. During cervix removal, a condom is inserted into the vagina to prevent gas leakage from the abdominal cavity (Figures 6,7). 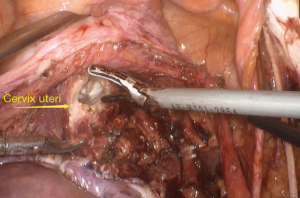 Figure 6 Break off the cervix uteri. 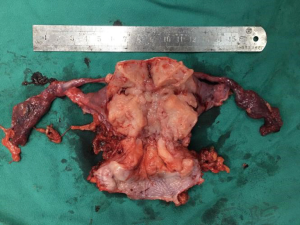 Funding: The present study was sponsored by the National Natural Science Foundation of China (No. 81972425), the Shanghai PuJiang Program (No. 17PJD032) and the Project Young Elite of the Shanghai Health System (No. 2017YQ063).

Conflicts of Interest: All authors have completed the ICMJE uniform disclosure form (available at https://gpm.amegroups.com/article/view/10.21037/gpm.2019.12.02/coif). The series “Award-Winning Videos from the First International Elite Gynecologic Surgery Competition (2019 Masters of Gynecologic Surgery)” was commissioned by the editorial office without any funding or sponsorship. The authors have no other conflicts of interest to declare.

Ethical Statement: The authors are accountable for all aspects of the work in ensuring that questions related to the accuracy or integrity of any part of the work are appropriately investigated and resolved. All procedures performed in studies involving human participants were in accordance with the ethical standards of the institutional and/or national research committee(s) and with the Helsinki Declaration (as revised in 2013). Informed consent was obtained from the patient.