Vulvar cancer accounts for 5% of all gynecologic cancers, and is seen in both young and old women. It also may have links with the increase of human papilloma virus prevalence (1,2). The treatment is based on stages, but both surgical resection and radical surgery have proven to be the most efficient approaches (2).

In 5 years, we have admitted 10 patients who were confirmed to be vulvar cancer and received surgery, 5 of whom underwent a modified radical vulvectomy together with surgical evaluation of the groin nodes. Using a laparoscopic approach to inguinal lymph node dissection as opposed to the traditional surgery, there was no difference in outcome and fewer complications occurred.

A 51-year-old woman, who had been suffering from pruritus vulvae for 3 months, had a tumor the size of a rice grain detected in the perineum. Erythrocin and acyclovir were used, but these failed to stop the tumor from growing to a mass of 2 cm × 1.5 cm in size. On April 22nd, the vulval biopsy suggested squamous cell carcinoma. The patient then underwent an extensive local vulvar resection and laparoscopic bilateral inguinal lymph node dissection (Video 1).

Under general anesthesia, the patient was placed in supine position with the lower limbs about 20–30 degrees apart.

Before surgery, the excision extension of the vulva was outlined (at least 1 cm outside the lesion). The femoral triangle boundary and localization of femoral vessels proceeded as follows: (I) the point of intersection of the adductor longus and sartorius was the apex of the femoral triangle. The patient’s lower limbs were placed in a 4-character sign, so that the outer and inner edges of the sartorius and adductor longus could be seen (particularly in thinner patients); the outer and inner edges of the sartorius and adductor longus could be identified by palpation for slightly thicker subcutaneous fat. Ultrasound can used to locate the adductor longus muscle and sartorius muscle in clearly obese patients. (II) The anterior superior iliac spine and pubic tubercle were located, with the connection between them being the superficial projection of the inguinal ligament. (III) The femoral canal runs in the inner side of the medial point of the inguinal ligament was identified, with the medial part as the femoral vein, and the lateral part as the femoral artery. Both palpation and ultrasound can be used to help locate the direction of the blood vessels (Figure 1A). 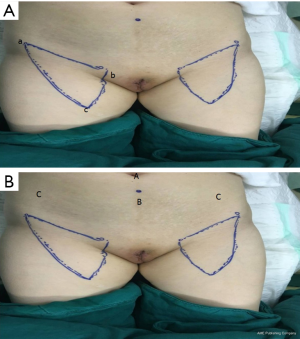 Figure 1 Anatomic marks and approach. (A) Femoral triangle boundary: a, anterior superior iliac spine; b, pubic tubercle; c, the point of intersection of the adductor longus and sartorius. (B) Trocar location: A, belly button; B, between the belly button and pubic symphysis; C, 10 mm medial to the anterior superior spine.

A trocar and laparoscope were used to develop the tunnel and clearance with the guidance of the body mark (Figure 2A). Starting from the aponeurosis of the external oblique, a 10-mm thickness of skin flap was separated by an ultrasound knife along the projection lines of the adductor longus and sartorius. The anterior working space was developed (Figure 2B), the inguinal ligament was exposed, and the superficial lymphatic tissues were separated from the periphery to the oval fossa. The external arteriovenous, superficial circumflex iliac arteriovenous, and superficial abdominal wall arteriovenous and lymphatic vessels were cut off. The great saphenous vein remained. Finally, the lymphatic nodes and node-bearing tissues were completely removed, narrowing toward the saphenofemoral junction (Figure 2C). The resected tissues were placed in a plastic bag. 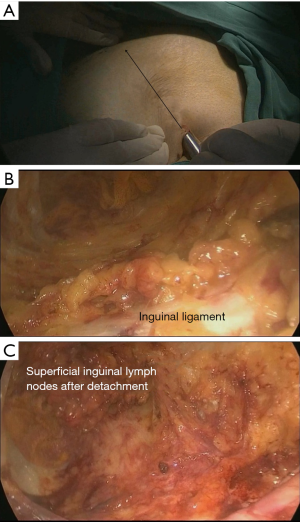 There were 3 to 5 deep inguinal lymph nodes located within the femoral triangle of the fascia lata and around the origin of the femoral artery.

During the operation, the deep femoral vein and branches of the femoral artery should be reserved, to achieve a good hemostasis (Figure 3). 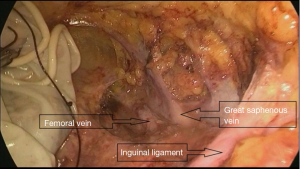 Figure 3 Deep lymphatic tissues were dissected around the femoral vessels.

Generally, excision of the vulva includes excision of the labia majora, labia minora, clitoris, and part of the perineum. The procedure involves resection of the vulvar skin, subcutaneous fat, superficial fascia, and fascia lata with a margin of 1 to 2 cm circumferentially (Figure 4A). The urethra should be protected during surgery. Subcutaneous tissue was separated blunt to the inguinal region, and lymph node tissue was completely removed (Figure 4B). 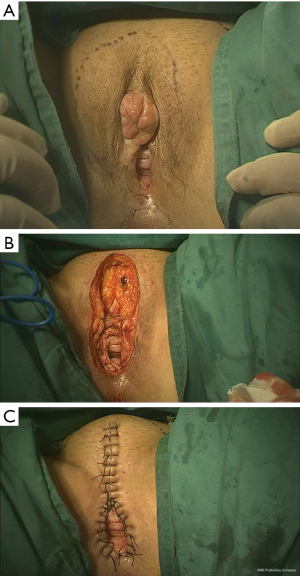 Starting from the back of the clitoris, we sutured the subcutaneous adipose tissue interrupted to the top of the internal incision to bring the internal and external skin incisions close together. The inner and outer incisions on both sides of the discontinuous subcutaneous suture should be conducted vertically down to the leading edge of the perineum. The alignment should be neat and not leave any subcutaneous dead space. Testing of the size of the vaginal opening after it is sewn up can be done with a finger and should allow 2–3 fingers through; this can help patient prevent difficulty during sexual intercourse after the operation. The vaginal wall was then sutured longitudinally to the ipsilateral perineal incision skin, and the remaining perineal skin on both sides was sutured intermittently (Figure 4C).

Vulvar cancer is a rare and aggressive gynecological malignancy, with regional metastasis to the inguinal lymph nodes being common with this condition (3). Vulvar cancer is staged surgically, and, according to the 2009 International Federation of Gynecology and Obstetrics (FIGO) and The American Joint Committee on Cancer (AGCC) TNM staging (2), staging relies on the size of tumor (T), spread to lymph nodes (N), and spread to distant sites (M) (3).

Way [1948] described the radical vulvectomy and bilateral inguinal lymphadenectomy through a butterfly incision (4), but this procedure was associated with significant morbidity, such as poor wound healing, lymphorrhagia or lymphocele, sexual difficulties. Therefore, in recent decades, a variety of modified surgical methods have been studied for vulvar cancer. Helm indicated that compared with traditional radical vulvectomy, the triple-incision techniques could better decrease operation time, lower blood loss, and reduce complications (5). The idea for an endoscopic approach to inguinal lymph nodes dissection (ILND) was practiced on the human body and reported successfully in 2005 by Tobias-Machado (6), which was confirmed to be safe and effective for vulvar cancer (7).

It can be sure that the video-endoscopic technique is the better choice for most patients as it provides a shorter hospital stay and a deceased risk of postoperative wound complications (7). Both of the two minimally invasive approaches can safely perform inguinal lymph node dissection of vulvar carcinoma [video endoscopic inguinal lymphadenectomy via the limb subcutaneous approach (VEIL-L); video endoscopic inguinal lymphadenectomy via the hypogastric subcutaneous approach (VEIL-H)]. VEIL-H uses 4 trocars, is less invasive than VEIL-L, and is convenient for pelvic lymph node dissection if necessary. It is worth mentioning that, unlike VEIL-L, VEIL-H includes using a large skin flap from the visualization port to the apex of femoral triangle. We used a laparoscope to develop the tunnel and clearance with the guidance of the body mark, and lymphatic tissues were safely and conveniently removed through the incision of the vulva.

Although there were no complications detected in this case, a longer follow-up is necessary to ensure positive outcome, while a series case of VEIL-H could more powerfully demonstrate the advantages of this surgery.

Conflicts of Interest: All authors have completed the ICMJE uniform disclosure form (available at https://gpm.amegroups.com/article/view/10.21037/gpm.2019.12.10/coif). The series “Award-Winning Videos from the First International Elite Gynecologic Surgery Competition (2019 Masters of Gynecologic Surgery)” was commissioned by the editorial office without any funding or sponsorship. The authors have no other conflicts of interest to declare.

Ethical Statement: The authors are accountable for all aspects of the work in ensuring that questions related to the accuracy or integrity of any part of the work are appropriately investigated and resolved. All procedures performed in studies involving human participants were in accordance with the ethical standards of the institutional and/or national research committee(s) and with the Helsinki Declaration (as revised in 2013). Written informed consent was obtained from the patient for publication of this manuscript and any accompanying images.