Cervical cancer is the 4th leading cause of cancer related death (7.5% of the total cancer deaths) in women worldwide (1). According to National Comprehensive Cancer Network guidelines, the following are considered as standard surgical treatments for early-stage cervical cancers: a modified radical hysterectomy (RH) with pelvic lymph node dissection (PLND) in International Federation of Gynecology and Obstetrics (2018; FIGO) stage IA1 with lymphovascular space invasion (LVSI) and IA2, and a RH with PLND with/without para-aortic lymph node dissection in FIGO stage IB1, IB2and selected IB3 and IIA1 (2). Previous guidelines had indicated that RH could be performed either via laparotomy or laparoscopy minimally invasive surgery (MIS) (2-4). Although a recently published prospective randomized trial indicated that MIS RH is associated with lower rates of disease-free survival (DFS) and overall survival (OS) than open RH is (5). However, some controversies about insufficient surgeons’ proficiency and a lack of effort to minimize tumor spillage in the MIS group still lie in this study. So all cervical cancer patients scheduled to undergo RH should be informed about the outcome of this LACC trial, and MIS RH could still be arranged to treat proper candidates according to the current practice guidelines, but it should be performed only by skilled gynecologic oncologists who are good at performing MIS. Furthermore, it also needs to establish proper indication for performing MIS basing on the tumor size and surgical methods to minimize tumor destruction or intraperitoneal spillage during colpotomy to ensure the oncologic safety of MIS in cervical cancer.

In this case, we described the laparoscopic radical dissection of cervical cancer procedure for a 40-year-old patient diagnosed with IB2 cervical cancer by precise anatomy, which was of invaluable meaning for the learner to understand the anatomic procedure, including the blood vessels, lymph nodes, nerves and so on. Besides, we emphasize on the well management of energetic instruments during the MIS, and better understanding of those instruments, including the basic working mechanism as well as the related heat damage. By doing so, we intend to reduce the blood loss and avoid damage to the maximum extent.

One 2+-cm cauliflower hyperplasia on the cervix was discovered on a 40-year-old female’s cervix, which was fragile and with contact bleeding, and no tumor was invaded to other nearby organs or tissues, including the fornix, the uterus, and the parametrium. Cervical biopsy revealed poorly differentiated squamous cell carcinoma. So the diagnosis was cervical poorly differentiated squamous cell carcinoma staging IB2. We planned to perform a laparoscopic radical resection of cervical cancer with type C2 RH in this patient after informing her about the benefit and risk of MIS RH (Video 1). The type C2 RH is as following: uterus removed, ovary optional removal; cervix completely removed; vaginal margin to the upper 1/4 to 1/3 of vagina; ureteral dissection to the ureters unroofed and dissected from cervix and lateral parametrium; paracervix/parametrial resection was divided at medial aspect of internal iliac vessels; the deep margin is the deep uterine vein; recto-uterine (uterosacral ligaments) was divided at least 2 cm dorsal from cervix; bladder was mobilized to middle vagina; rectum was mobilized below middle vagina.

After intubation, the patient was placed in the lithotomy position. An observation port was made 4 cm above the umbilicus. Another two incisions of about 1 cm were made in the left lower abdomen and one incision of about 1 cm was made in the right lower abdomen. The uterine manipulation was placed into the cervix from the vagina to lift and move the uterus. Carbon dioxide was insufflate into the abdomen to create the pneumoperitoneum, and after comprehensive exploration of pelvic and separation of pelvic adhesion, intestinal adhesion, the round ligament was cut off at 3-cm point from the uterus attachment points and a parallel incisions of the peritoneum with iliac blood vessels was made to free the infundibulopelvic ligament and then was clamped. Then the oviduct isthmus and the ovarian ligament of the right side were cut off, and the right fallopian tube was then removed, the left fallopian tube and the related ligament of the ovary were treated in the same way. The internal iliac vessels and the external iliac vessels were identified and exposed. The space between the obturator fossa and the lateral external iliac vessel was widened by blunt dissection, carefully exposing the obturator nerve and the vessel network below it (Figures 1,2). Then para-aortic lymph node sampling was performed, and the common iliac, internal iliac, external iliac, deep femoral, and obturator lymph nodes on the left and right sides of the pelvic cavity were dissected in sequence. The obturator vessel, the end of the internal iliac artery, was found, the uterine artery was distinguished, and the uterine vessels were cut off by electric coagulation at the beginning of the internal iliac artery. The uterus rectum vagina peritoneal fold was opened, the rectum was separated from the posterior wall of the vagina to reach 3 cm below the cervix, and the sacral ligament was exposed and cut off by 3+ cm. 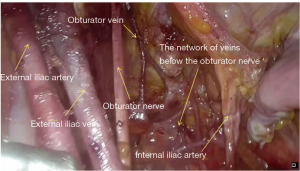 Figure 1 The internal and external vessels, the obturator nerve, and the vein network were identified and exposed. 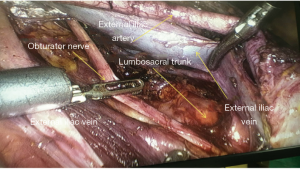 Figure 2 The internal and external vessels, the obturator nerve, and the lumbosacral trunk were identified and exposed.

The broad anterior ligament was opened, as well as the bladder peritoneum reflex; the bladder was pushed down from the lower uterine, cervix, and the upper 3 cm of the vagina. Then the ureter tunnel was expanded, the ureter was completely dissected from the parametrium and paracervix. The cardinal ligament was exposed, and the vessels in the parametrium and paracolpium were then identified, including the uterine artery, bladder artery, vaginal artery and the associated veins (Figure 3). After the coagulation of the vessels, the cardinal ligament was then cut off near the lateral wall of the pelvis as well as partial paracolpium. The vagina was cut off by 3+ cm away from the cervix, then the uterus was completely resected, and taken out via vagina together with the fallopian tubes and lymph nodes on both sides, then a glove with folded gauze was put into the vagina to prevent carbon dioxide leakage. Then the vaginal wall was closed by suturing intermittently. The bilateral ovaries were then fixed at 10+ cm above the ipsilateral iliac fossa. 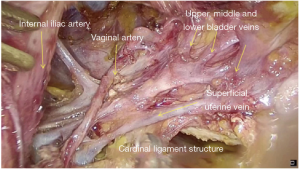 Figure 3 The parametrium structure, the cardinal ligament, the uterine artery, bladder artery, vaginal artery, and the associated veins were exposed.

In order to minimize or to avoid the damage to the nearby tissues and organs, such as the ureter, the rectum, and the vessels as well as the nerves, we suggest the surgeons must have a better understanding of the pelvic and abdominal anatomy. The main systems include the vessel system, the nerve system, and the lymph system. Precise identification of the anatomical structure is fundamental to carry out the procedure smoothly. Careful dissection of the ureter and the vessels, as well as the nerves, is vital to RH and the lymph node resection as well as to preserve the nerve function, as these structures can be variable in different patients. The habit of “identification before cut” cannot be overemphasized in surgeons who want to master this art. For precise anatomy of the structures, the vessels should be skeletonized with cautious to prevent bleeding and to provide a clear vision

Precise and gentle dissection in a sculpting manner of every main artery, vein as well as the ureter and nerve with the knowledge of their running pattern is the sole of the procedure. There are many spaces that can make it easier to dissect the tissue, including para-vesical space, para-rectal space, uterosacral space, vesicovaginal space, rectovaginal space, vesicovaginal cervical space. And if we can dissect the tissue through those space, it can help to reduce the blood loss and minimize the damage related to hemostasis. We should perform every case of anatomic RH with the spirit of the craftsman. Well understanding and management of the energy instrument is also the basic requirement for the MIS. How to use those instruments properly and minimize the heat damage is critical.

Conflicts of Interest: All authors have completed the ICMJE uniform disclosure form (available at https://gpm.amegroups.com/article/view/10.21037/gpm.2019.12.11/coif). The series “Award-Winning Videos from the First International Elite Gynecologic Surgery Competition (2019 Masters of Gynecologic Surgery)” was commissioned by the editorial office without any funding or sponsorship. The authors have no other conflicts of interest to declare.

Ethical Statement: The authors are accountable for all aspects of the work in ensuring that questions related to the accuracy or integrity of any part of the work are appropriately investigated and resolved. All procedures performed in studies involving human participants were in accordance with the ethical standards of the institutional and/or national research committee(s) and with the Helsinki Declaration (as revised in 2013). Informed consent was obtained from the patient for publication of this manuscript and any accompanying images.