Use of GnRH analogue in the endometriosis recurrence after surgery

Endometriosis recurrence represents a fight for the gynecologist. The recurrence rate after surgery varies considerably in scientific literature due to multiple factors. Firstly, the definition of the recurrence is different among the available studies. Some studies consider “recurrence” the symptoms reported by patients, while others measure the recurrence with more objective clinical/instrumental methods, for instance, the assessment of endometriomas relapse by ultrasonography. Moreover, the length of follow-up varies among the sources, the previous surgical radicality and technique are different (1).

The general reported incidence rate of disease recurrence, regardless of the definition, is 19.1% after two years from surgical treatment and it ranges between 20% and 44% after five years (1-3). The subjective recurrence seems more frequent than the objective one and there is a low correlation between the symptoms and the stage of the disease. The objective rate is reported to be 9% after three years post-surgery and 28% after 5 years, while the symptoms recurrence varies between 20.5% after 3 years and 43.5% after 5 years (2).

Several mechanisms have been proposed to explain the return of the disease after surgery: the de novo recurrence of the endometriotic lesions (probably due to a retrograde menstruation) or the increasing of microscopic lesions persisting after surgery. The frequent relapse of the lesions on the same site of the previous surgical excision supports the last theory (4). Moreover, sometimes surgery is performed in a sub-optimal way, thus leaving on-site small lumps (5).

The adjuvant hormonal treatment is suggested by numerous evidences and by the guidelines from the European Society of Human Reproduction and Embryology (ESHRE) (6) in order to delay and prevent the recurrence of the disease after surgery and eradicate potential persistent spots of endometriosis. The medical treatment is reported to be more effective when started soon after surgery and when the duration of the treatment itself is long, since exogenous hormones are not healing but they exert a temporary suppressive action on a chronic and estrogen-dependent disease.

Short term treatment, inferior to six months, aims to symptoms control and to delay of the pain return, while a long-term treatment represents a long-term prevention of the disease, ideally avoiding his progression and the related symptoms, such as dysmenorrhea, chronic pelvic pain and deep dyspareunia (7).

However, compared to the short-term therapies, the long-term ones are burdened by more side effects, especially relevant for gonadotropin-releasing hormone agonist (GnRHa) and the danazol, and by costs (particularly for GnRHa and the aromatase inhibitors, AI). An add-back therapy is often administrated in association with GnRHa in order to improve the medications tolerability and the combination AI-GnRHa has been proposed too (8-12). On the other hand, the suspension of the suppressive therapy is associated to a return of the symptoms (13).

The aim of the present review is to assess the effectiveness of GnRHa after surgery for endometriosis in preventing the disease recurrence.

We included only high quality randomized controlled trial (RCT) published in English and we collected studies in which the intervention was the GnRHa administration after surgery for endometriosis with the aim of assessing the recurrence rate.

The studies were excluded if the Jadad score was inferior to 3 (see Table S1), the study did not specify the recurrence rate after adjuvant therapy, the population did not undergo to a surgical treatment (some researchers performed only a diagnostic laparoscopy before hormonal therapy), the medical intervention was not postoperative and it was not specified which type of hormonal therapy was administered.

Bias of each eligible study was assessed according to the Jadad scale (14) (Table S1), evaluating the randomization, the double blinding and the dropout and withdrawal reports of the trials. A score ranging between 3 and 5 was needed to design a trial as “high quality”.

As showed in Figure 1, we identified 1747 studies, of which 402 were screened for eligibility. Finally, among the 30 eligible studies, 20 were excluded because they did not satisfy the inclusion criteria (15-34) and a total of 10 relevant RCT were included in the review (35-44). 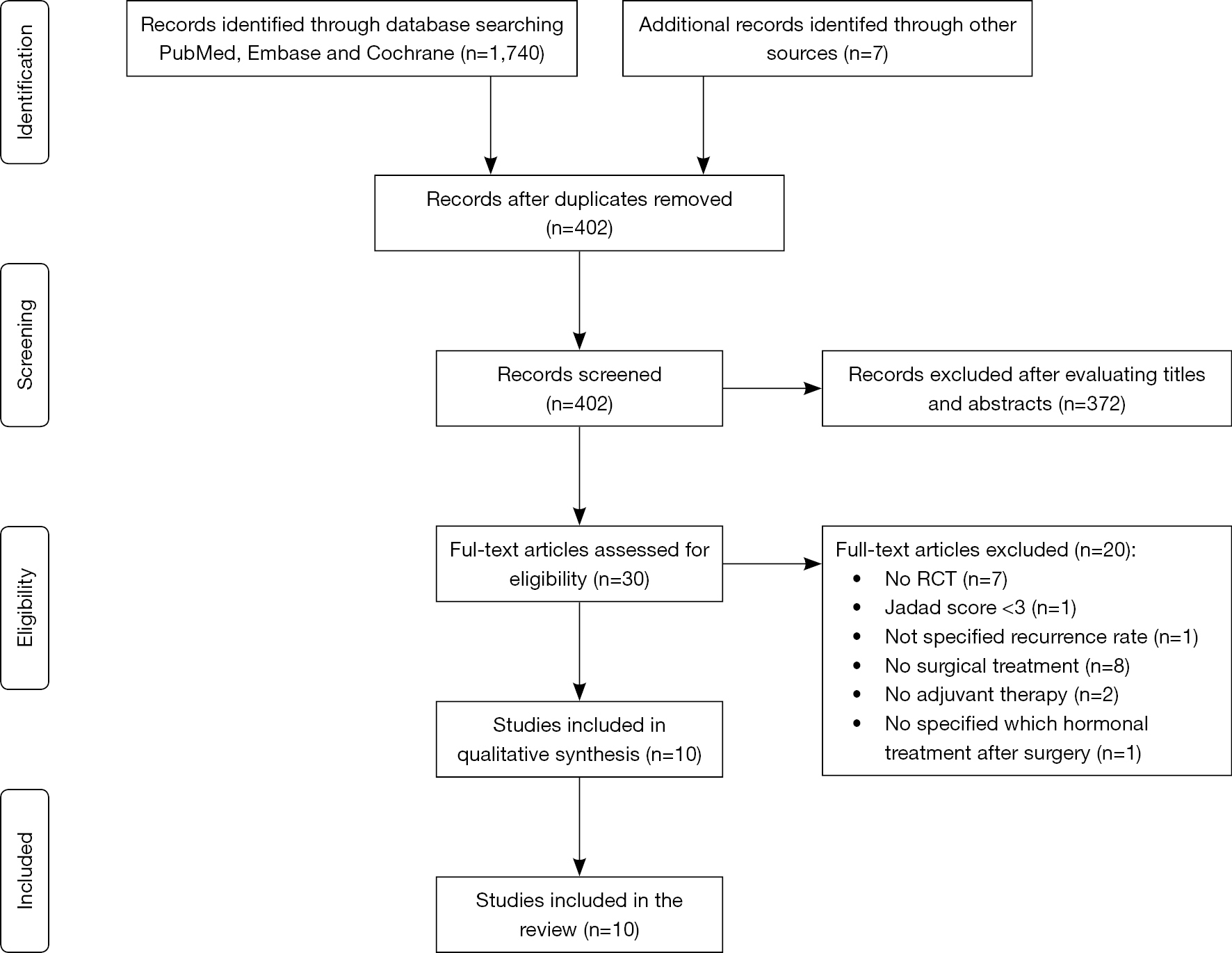 We divided the included trials into three subgroups according to the recurrence parameter considered, as summarized in Tables 1-3. Three studies (35,41,42) reported an objective parameter of recurrence. They analyzed the rate of endometrioma relapse with an ultrasound exam or the endometriosis recurrence with a second line surgery (sometimes obtaining a histological exam) and/or with an increase of Ca125 serum levels. Four RCT (38,39,43,44) described a subjective recurrence parameter consisting in the severity of pain reported by the patients. Validate pain scales, such as verbal rating scale (VRS) or visual analogue scale (VAS), were employed for measuring the intensity of dysmenorrhea, chronic pelvic pain and dyspareunia. The remaining studies (36,37,40) considered both the subjective and objective recurrence. 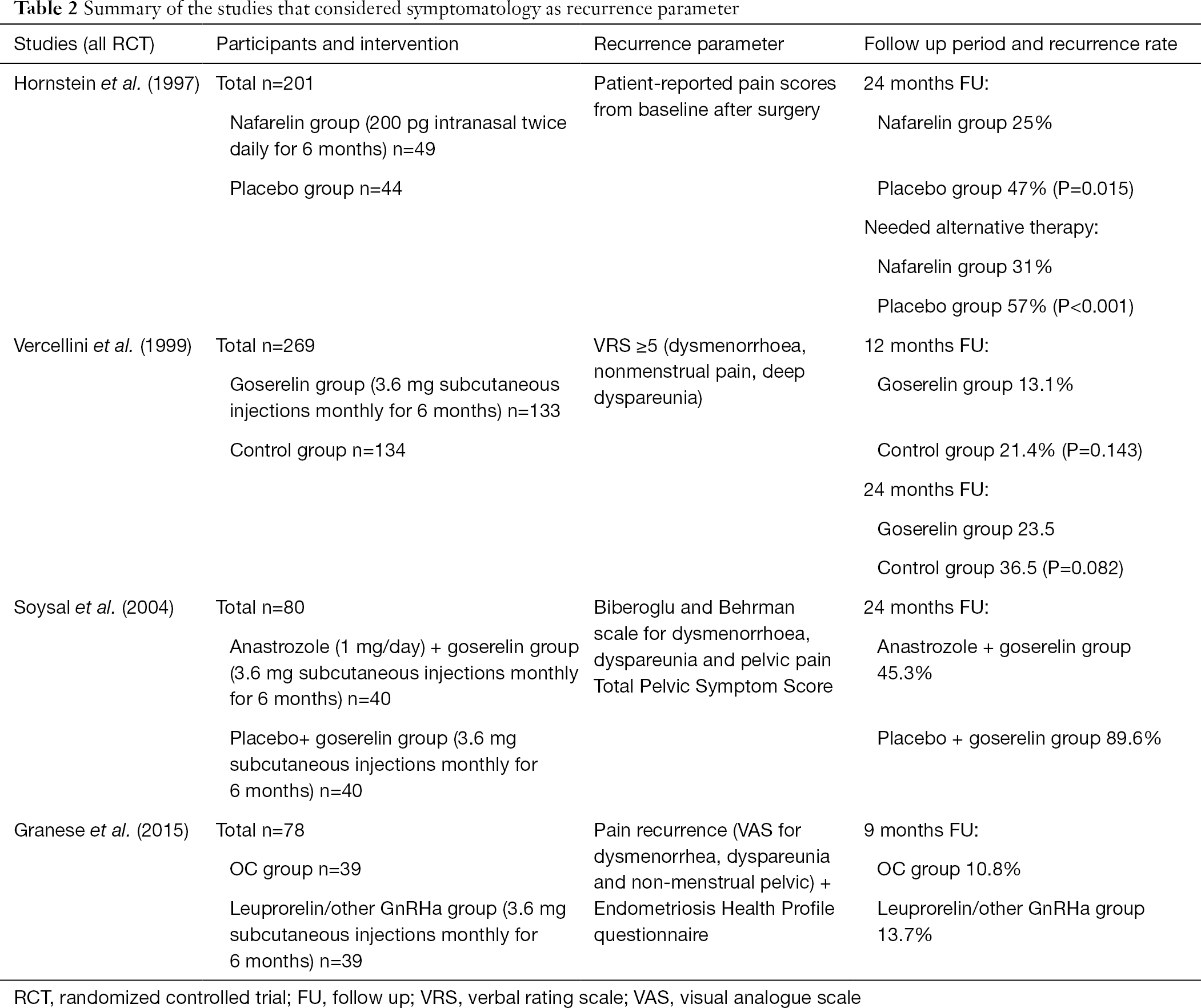 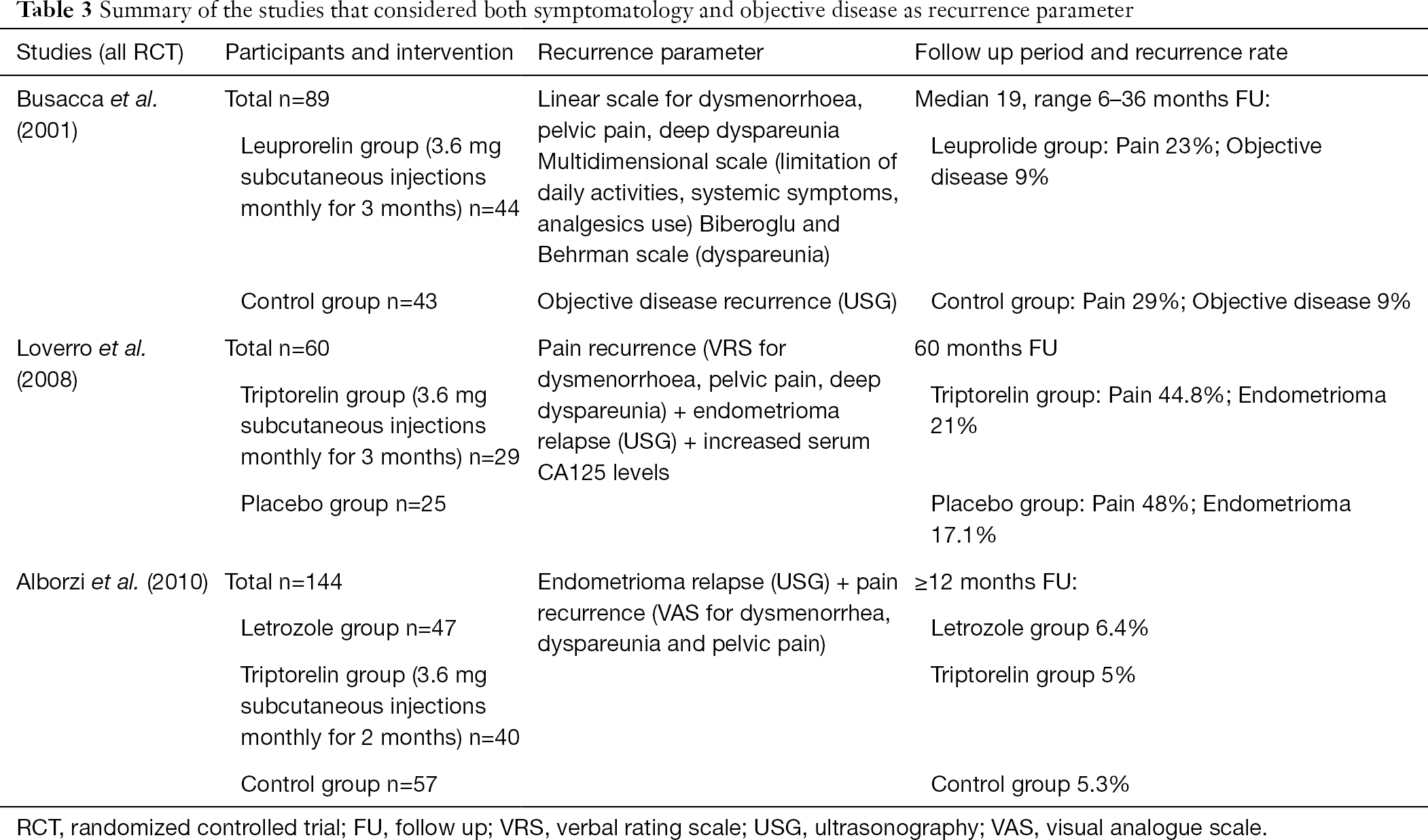 The intervention of all the trials consisted by a short-term adjuvant therapy with a maximum treatment duration of 6 months.

Some of the included studies compared GnRHa to other hormonal therapies, of which two trials compared GnRHa to OC (38,41) and two others studied the impact of AI (36,43). Both the studies comprising OC group showed similar results concerning the recurrence rate compared to the GnRHa administration. One of them considered the endometrioma relapse (41) and the other one the symptoms recurrence (38). Concerning the AI effectiveness, the two mentioned studies described controversial results. Soysal et al. (43) reported a lower recurrence rate with the combination anastrozole-goserelin compared to the goserelin alone after 6 months of treatment, while Alborzi et al. (36) did not show any significant difference between triptorelin, letrozole and control group but the duration of the treatment was only 2 months for each group.

The remaining studies include in the present review showed conflicting results too. Three trials did not support the adjuvant GnRHa treatment (35,37,40) and other three reported a positive outcome on recurrence rate (39,42,44). Among the last cited, Vercellini et al. and Hornstein et al. (39,44) observed an increased pain-free interval and a delay of symptoms needing further treatment after GnRHa administration for 6 months after surgery, compared to no adjuvant treatment. Other researchers (42) reported their outcomes after laparoscopic aspiration of endometriomas, reporting a potential benefit of goserelin administration on diameter of the recurrent endometrioma. A smaller endometrioma size could offer an advantage for a second-line surgery.

The use of the post-operative hormonal treatment after conservative or radical surgery for endometriosis is supported by numerous studies and by the ESHRE (6,10). Moreover, treatment duration seems to be crucial in the prevention of the disease (13,45).

The short-term treatment with GnRHa showed conflicting results. However, also OC short term treatment reported similar outcomes to GnRHa treatment concerning the recurrence rate (38,41). Muzii et al. (46) showed a low protective effect after adjuvant short term therapy with cyclic OC (although they reported a delay in symptoms recurrence compared to the control group), while other researchers (47-51) reported a beneficial impact of long term OC administration (for more than 6 months). Considering the available literature, it results reasonable to focus our attention on the treatment duration rather than on the kind of suppressive therapy used.

Considering that GnRHa are burdened by the well-known side effects related to hypoestrogenism, the reported studies did not employ them in a long-term period. When they are used for more than 6 months, an add back therapy should be considered. Although it is difficult to understand how much a short-term use of GnRHa influences the recurrence rate, more studies reported a longer pain free interval and a delay of recurrent endometriosis related symptoms.

Finally, we used the Jadad scale to assess potential bias of the studies. This quality scoring system includes the double-blinding among the “quality parameters”; however, most of the RCT are not double-blind (35-38,42,44) because it results difficult to conduct a double-blind study employing a medication with severe side effects.

Long term therapy plays a crucial role in the prevention of endometriosis related symptoms and endometriomas relapse after surgical treatment. However, the well-known side effects caused by GnRHa limit their use for a long period. The review reports conflicting results concerning the role of short-term therapy with GnRHa on recurrence rate, even if several studies describe a delay of recurrence of symptoms. Further researches are needed to clarify the impact of postoperative suppressive therapy also on deep infiltrating endometriosis (7).

Conflicts of Interest: All authors have completed the ICMJE uniform disclosure form (available at http://dx.doi.org/10.21037/gpm-20-31). The series “Medical Therapy in Endometriosis Treatment” was commissioned by the editorial office without any funding or sponsorship. FB and SF served as the unpaid Guest Editors of the series. SF serves as an unpaid editorial board member of Gynecology and Pelvic Medicine from Oct 2018 to Sep 2020. The authors have no other conflicts of interest to declare.