Ovarian cancer is a highly aggressive disease and, despite complete surgical cytoreduction and adjuvant chemotherapy, women with this diagnosis usually develop recurrent disease (1).

Platinum-sensitive recurrence can be treated either with secondary cytoreductive surgery (SCS) plus platinum-based chemotherapy or with chemotherapy alone (2,3).

The major route of metastatic spread to the spleen is the hematogenous pathway. Splenic metastasis are usually associated with disseminated disease, while isolated splenic metastases are relatively rare (4).

As a matter of fact, the incidence of splenic metastasis from non-hematologic malignancies ranges from 0.6% to 1.1% (5) and, in this specific subset of patients, surgery is considered a valuable option, being also associated with an improved prognosis (6).

In this scenario, minimally invasive splenectomy may play a pivotal role in the treatment of isolated splenic recurrence, although there are only few reports in literature (7).

We present the case of a 53-year-old women with a platinum-sensitive recurrence of FIGO stage IIIC high-grade serous ovarian cancer (HGSOC).

At the time of primary debulking surgery (PDS) she underwent retrograde total hysterectomy with en bloc resection of rectosigmoid colon, bilateral salpingo-oophorectomy, radical omentectomy, right diaphragmatic peritonectomy and appendectomy reaching a complete cytoreduction with no residual disease. The surgery was followed by a standard adjuvant platinum-based chemotherapy and a maintenance therapy with bevacizumab.

The purpose of this video is to demonstrate a step-by-step approach to laparoscopic splenectomy during SCS (8).

We report a laparoscopic splenectomy, using an anterior approach, with the patient laying in supine position (Video 1).

Trocar positioning is crucial for successful surgery with proper operator ergonomics. We placed the camera through a 10 mm transumbilical trocar, a 10 mm trocar in the upper portion of left lumbar region, useful to introduce the vascular clips and the endovascular stapler, two 5 mm trocar located respectively in epigastric region and in the upper portion of right lumbar region in order to achieve optimal triangulation.

The procedure start by the section of the gastro-colic ligament in order to enter the lesser sac (Figure 1). Then, by lifting the stomach to the right, the pancreas body/tail can easily be identified transperitoneally. At this point, the ventral layer of spleno-renal ligament can be divided to reach the underlying splenic hilum (Figure 2). The pancreas tail is cautiously mobilized by blunt dissection from the splenic hilum (Figure 3). Once the splenic hilum is exposed, a meticulous dissection is carried out to reach the full control of the splenic vessels, unveiling the main vascular trunk and the lobar or segmental splenic vessels (Figure 4). 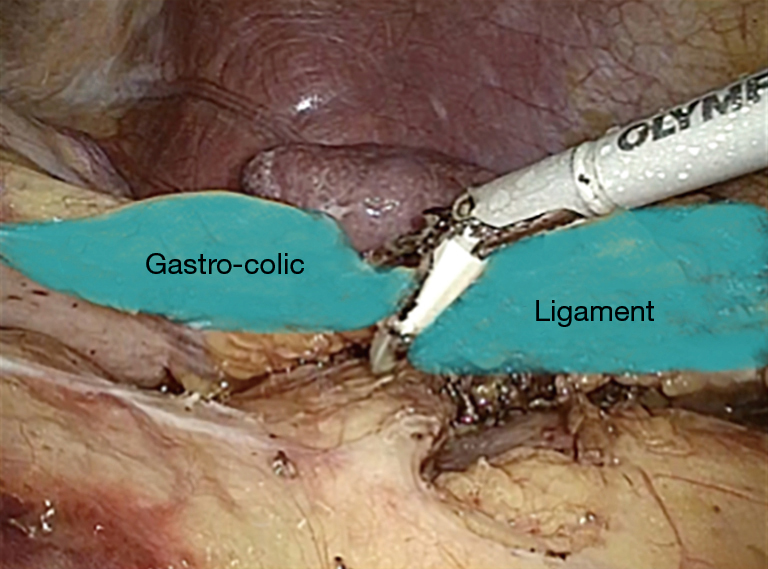 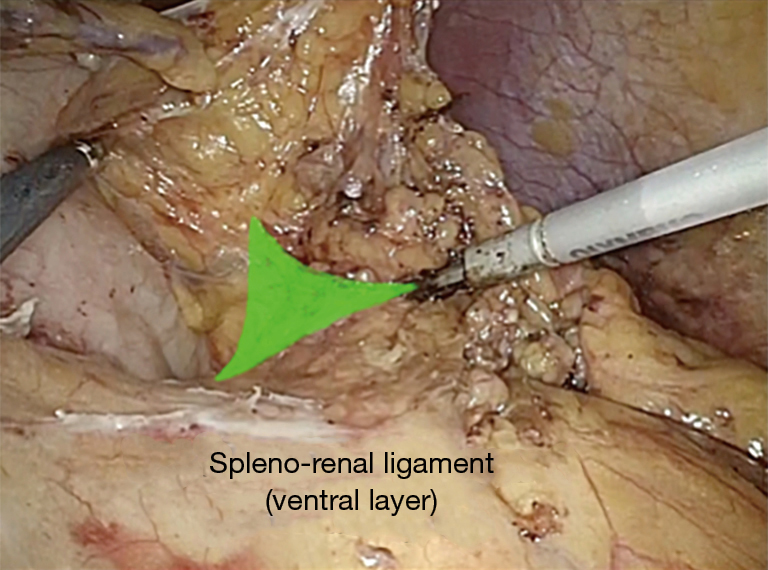 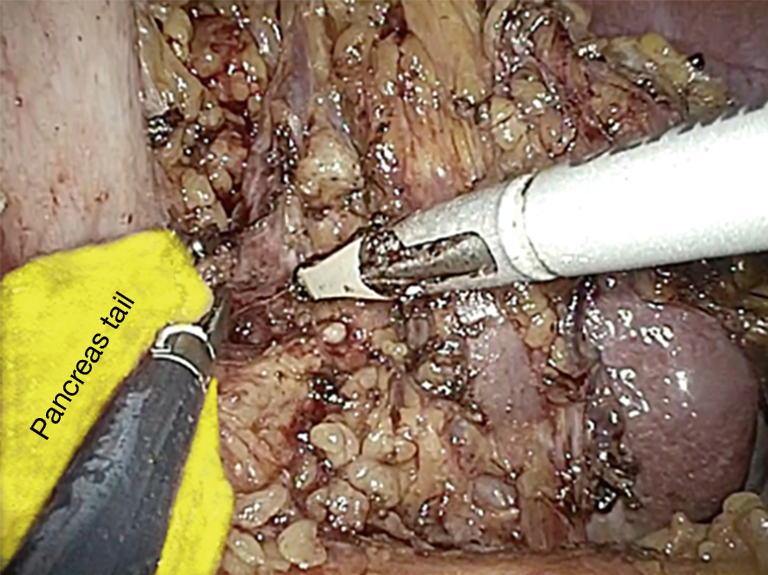 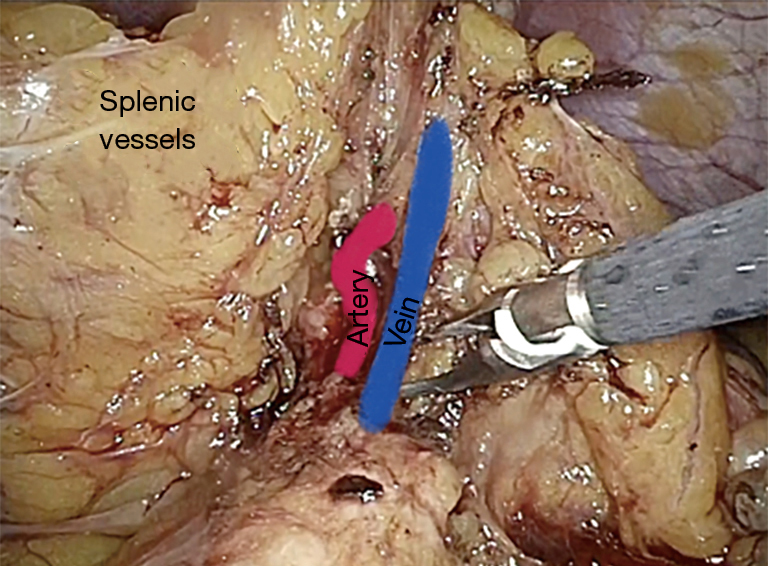 The phrenocolic and splenocolic ligament are then divided to access to the lateral peritoneal attachments (Figure 5). The isolated splenic hilum is detached from the underlying kidney and perirenal fat (Figure 6). Subsequently, the dorsal layer of the spleno-renal ligament is divided to achieve an adequate medial mobilization of the spleen (Figure 7). 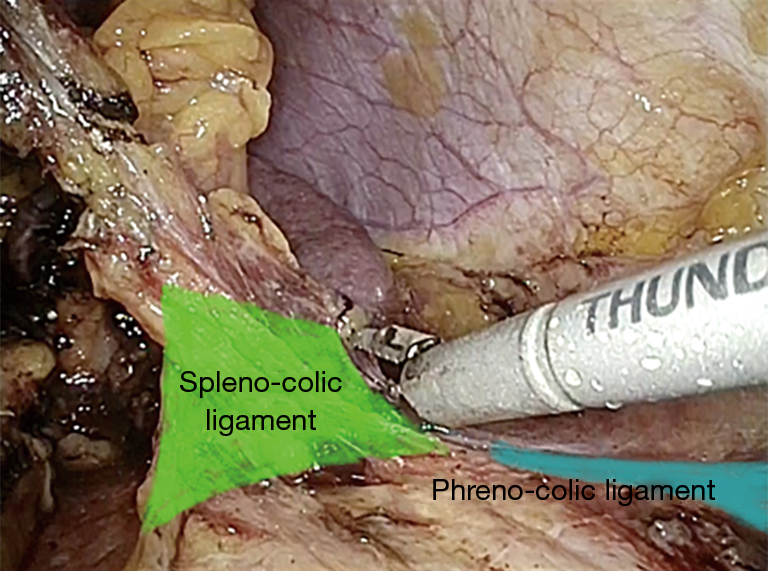 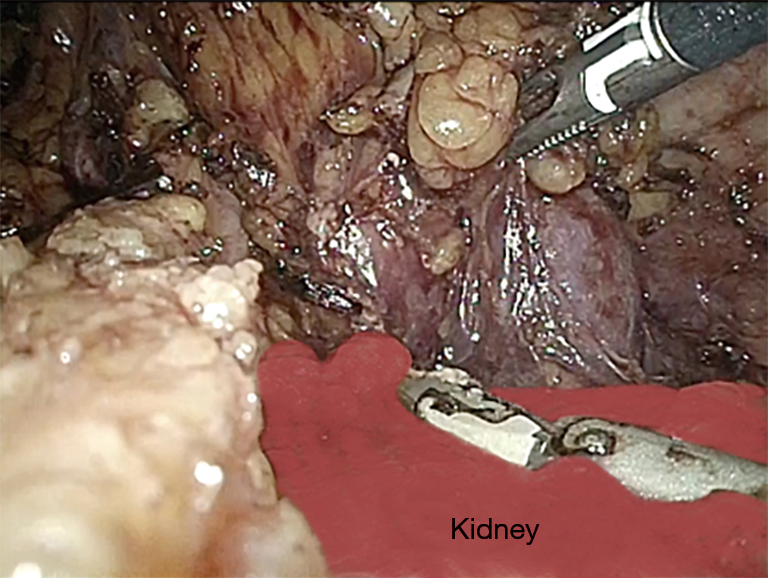 Figure 6 Detachment of the splenic hilum from kidney and perirenal fat. 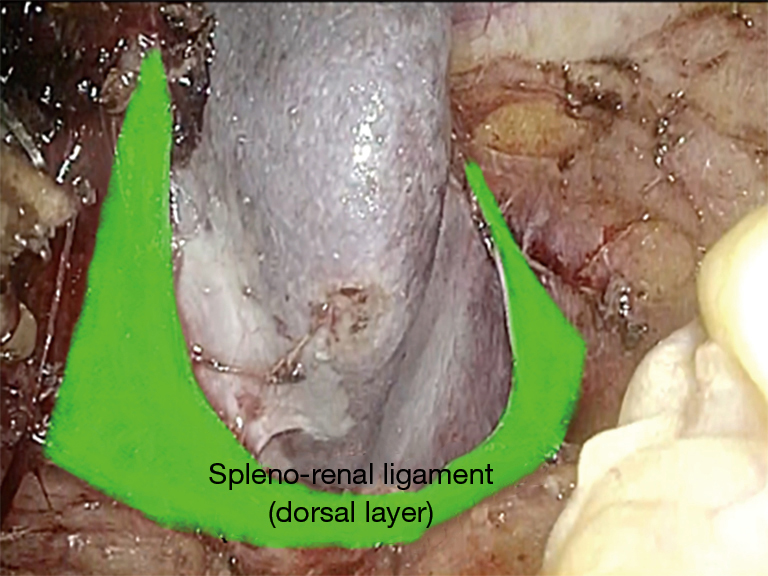 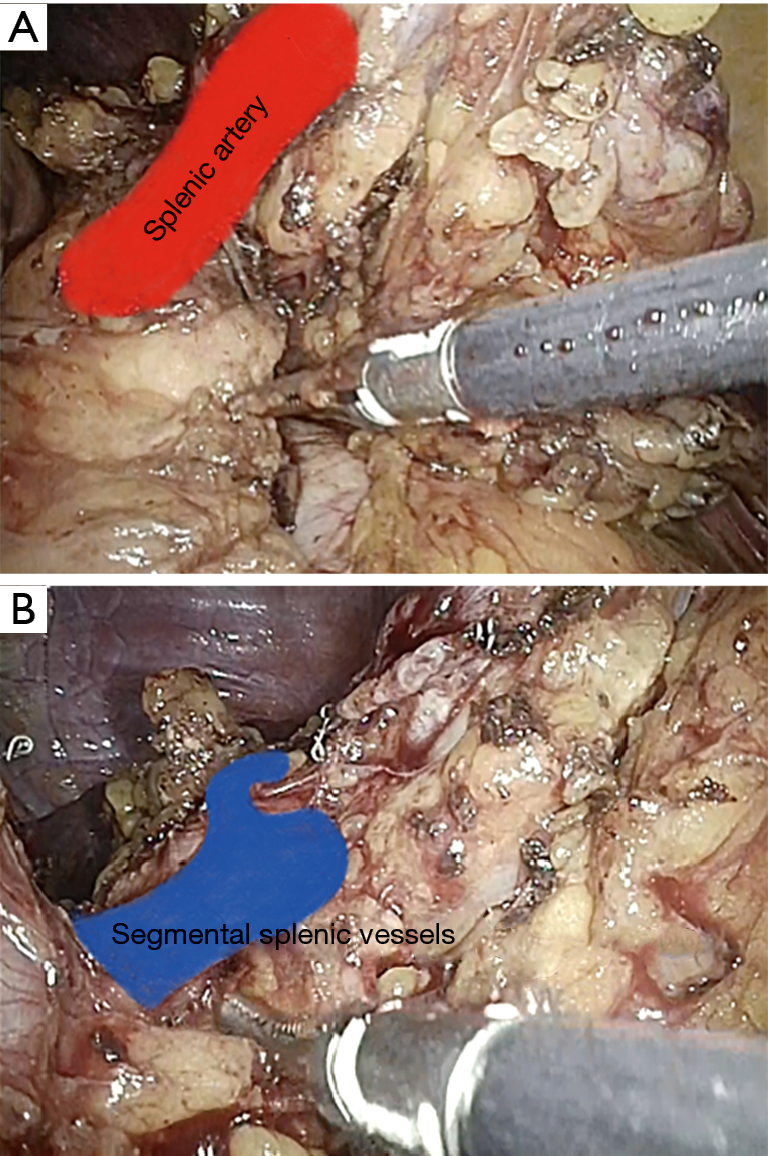 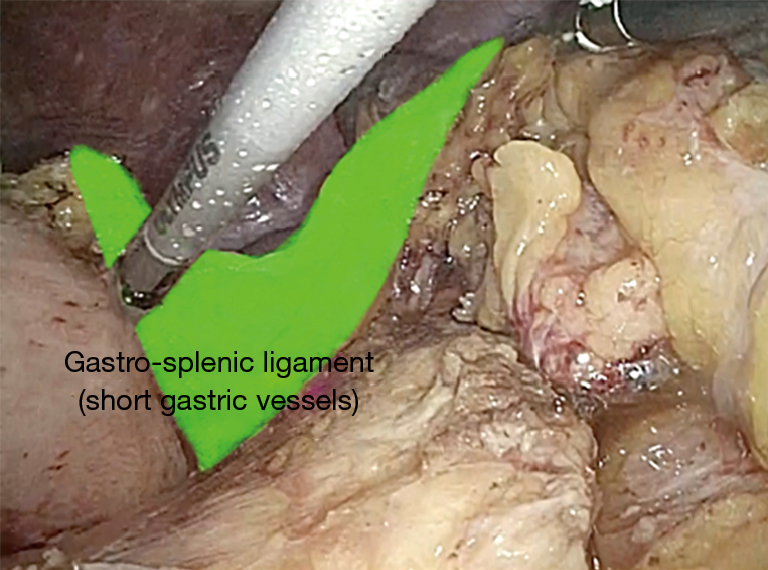 Finally, the spleno-phrenic ligament is dissected and the splenectomy is completed (Figure 10). 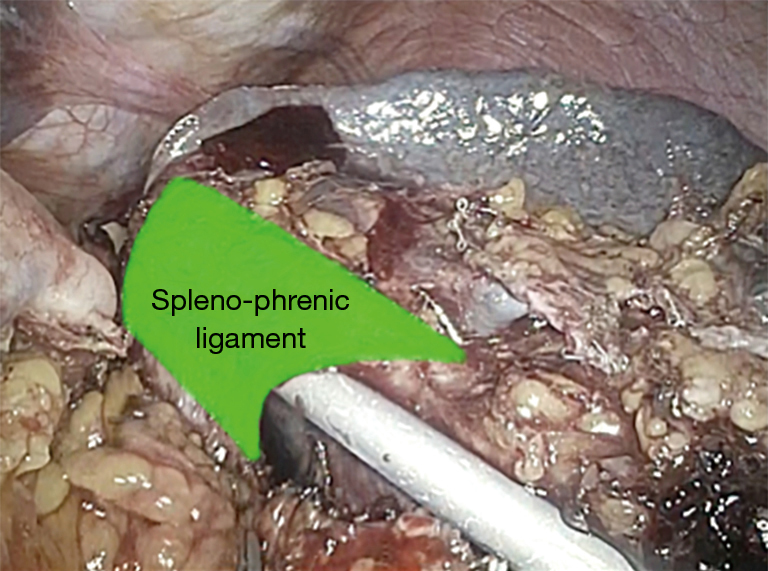 After an accurate check of the hemostasis, the resected specimen is placed in an endoscopic bag and removed.

The combination of FDG-PET/CT and diagnostic laparoscopy can lead to an optimal patient selection, helping the gynecologist to accurately plan the surgical strategy and to evaluate the possibility of a minimally invasive approach (9).

Under a technical point of view, unlike laparotomy, the success of the laparoscopic approach strongly depends on the correct positioning of the trocar and on an optimal triangulation of the instruments (10).

Given these limitations, the “anterior technique” for splenectomy is usually preferred in laparoscopy.

In this technique the spleen remains attached to its posterior aspect for the majority of the procedure, while the surgeon perform a precise and careful dissection of the splenic hilum.

The dissection necessarily proceeds caudo-cranially and medial to lateral, gradually lifting the spleen. After being carefully isolated, the anatomical structures are divided until the upper pole, where only the spleno-phrenic ligament remains to be cut to free the spleen in its entirety.

Perioperative outcomes of the reported case were superimposable to the open thecnique, with an estimated blood loss of 50 mL and an operative time of 150 minutes.

The patient was discharged after 6 days and no intra/post-operative complications were recorded.

The patient started a platinum-based second line chemotherapy after 32 days from SCS and at 25 months of follow-up there was no evidence of disease.

Regarding oncological outcomes, a favourable prognosis is described in literature for this particular subset of patients with localized ovarian cancer relapse (11).

In conclusion we showed that, in the hands of an experienced surgeon and through a meticulous surgical technique laparoscopic splenectomy is feasible and safe.

In addition, the advantages of laparoscopy in terms of reduced morbidity, faster recovery, and better cosmetic outcomes are positively reflected on the patient “recurrence experience”, lightening its burden with a potential positive impact on their quality of life (12).

Conflicts of Interest: All authors have completed the ICMJE uniform disclosure form (available at http://dx.doi.org/10.21037/gpm-20-37). The series “Laparoscopic Surgery for Ovarian Cancer” was commissioned by the editorial office without any funding or sponsorship. The authors have no other conflicts of interest to declare.