Considering its advantage in terms of reduction of peri-operative complications and hospital stay, in the last decades laparoscopy has been identified as the preferred surgical way for the management of benign adnexal disease (1). Moreover, due to the significant improvement of the laparoscopic techniques, the indications to laparoscopy have been extended also to the diagnosis and treatment of suspicious ovarian masses (2), and to the treatment of early-stage ovarian cancer (3).

The principal concern about laparoscopic removal of large ovarian cysts includes the risk of spillage. Cyst rupture could upstage an unexpected ovarian cancer from FIGO (International Federation of Gynecology and Obstetrics) stage IA to IC (4). This can result in otherwise useless chemotherapy and even in a possible worsening of the prognosis (5).

The aim of this manuscript is to provide a step by step video demonstration of the technique of laparoscopic extraperitoneal salpingo-oophorectomy in order to provide an easy and safe surgical option for the management of suspicious ovarian masses.

The patient is positioned in dorsal lithotomic position. After trans-umbilical open laparoscopy, a 10-mm Hasson trocar is inserted, and pneumoperitoneum is induced. A 10-mm 0-degree operative laparoscope is introduced. Three other 5 mm accessory ports are placed, under direct visualization, one on the right and one on the left lower quadrant, laterally to the rectus muscles, and another one in the suprapubic area. When required, an additional 10 mm trocar can be inserted in the left hypochondrium in order to facilitate the mobilization of the intestinal loops. The patient is placed in Trendelenburg position to allow gravity to displace the intra-abdominal contents out of the pelvis. Pelvis and high abdomen are carefully explored (Figure 1). Once carcinomatosis is excluded, in order to obtain a histological diagnosis, a laparoscopic extraperitoneal salpingo-oophorectomy is performed (Video 1). Peritoneal washing is obtained before starting the procedure. 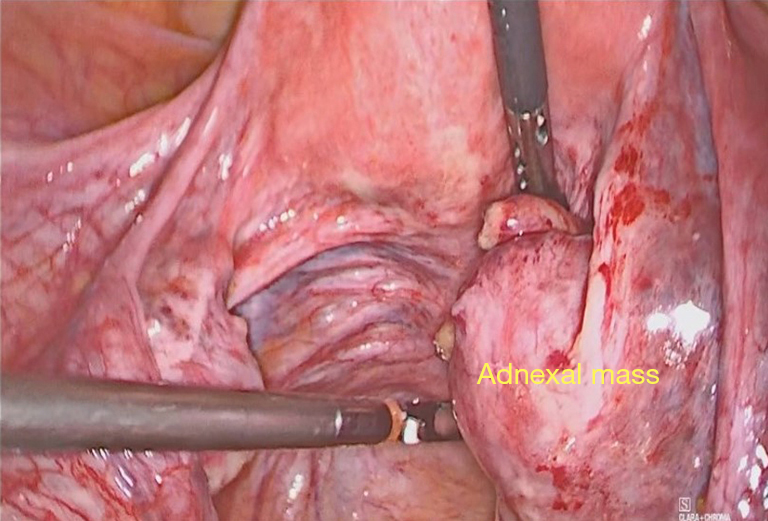 A safe space for surgical dissection in order to isolate the ovarian vascular supply is trans-peritoneally identified. The retroperitoneal space is accessed by incising the peritoneum at the posterior leaf of the broad ligament laterally to the infundibulopelvic ligament (Figure 2). The areolar tissue between the anterior and posterior pages of broad ligament is dissected. The ureter is identified and isolated as far as its junction with the uterine artery to free it from the layer of the broad ligament. The ventral portion of the Okabayashi medial pararectal space is then developed (Figure 3). 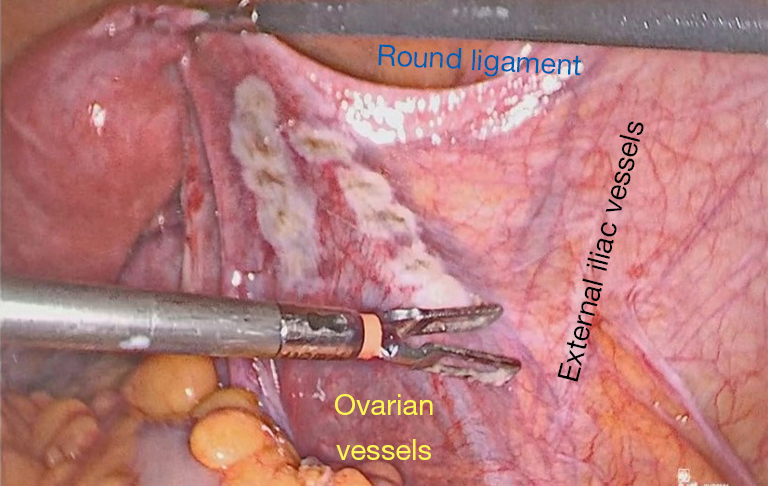 Figure 2 Access to the pelvic retroperitoneum by incision of the posterior page of the broad ligament. 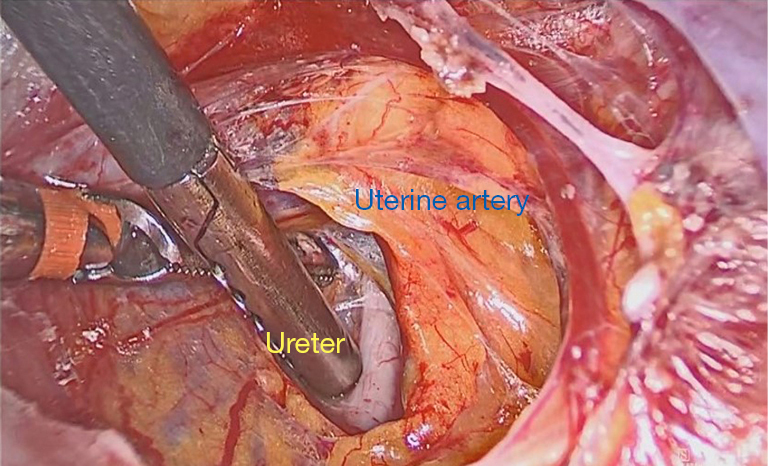 An anatomical fenestration is created through the posterior leaf of broad ligament in order to push down ureter and to completely isolate the infundibulopelvic ligament (Figure 4). 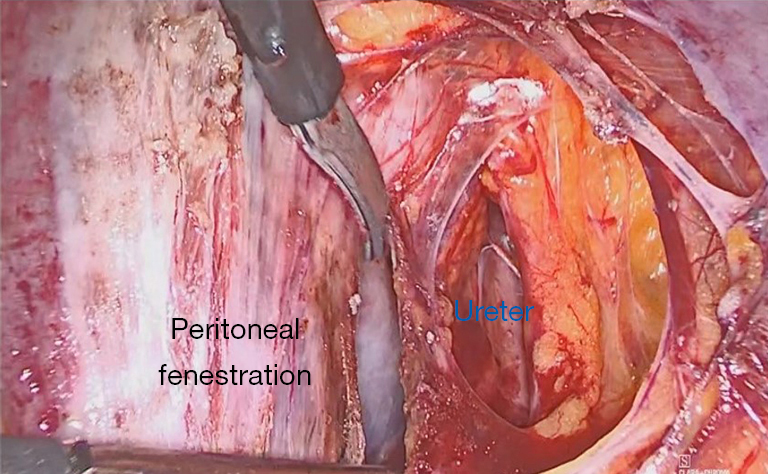 Figure 4 Creation of a peritoneal fenestration through the posterior part of the broad ligament.

The ovarian vessels are now isolated from the ureter and can be safely coagulated with bipolar grasper and cut (Figure 5). The utero-ovarian ligament and the isthmic part of the fallopian tube are then coagulated using bipolar electrosurgery and cut (Figure 6). Posterior pelvic peritoneum, completely dissected from the ureter becomes a sheet under the mass, useful for tractions, avoiding mass manipulations (Figure 7). Complete detachment of the mass is obtained, with preservation of its integrity respecting the surrounding anatomical structures (Figure 8). An endobag extractor is inserted through the umbilical port and the specimen is carefully placed in endobag and pulled out through an umbilical mini laparotomy (the umbilical incision is extended along the umbilical length to gain up to 3 cm). 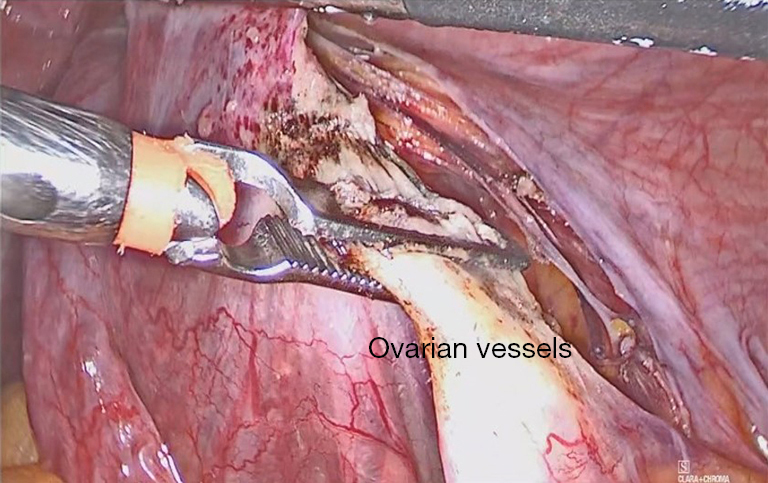 Figure 5 Coagulation and section of the infundibulopelvic ligament. 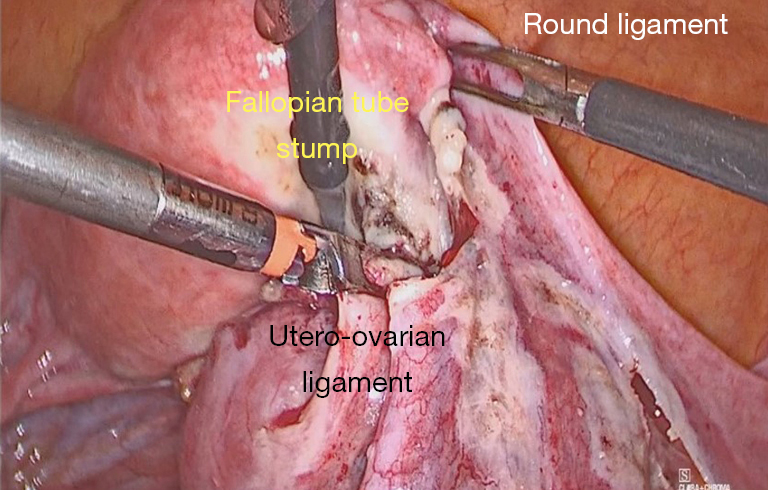 Figure 6 Coagulation and section of the utero-ovarian ligament and of the isthmic part of the fallopian tube. 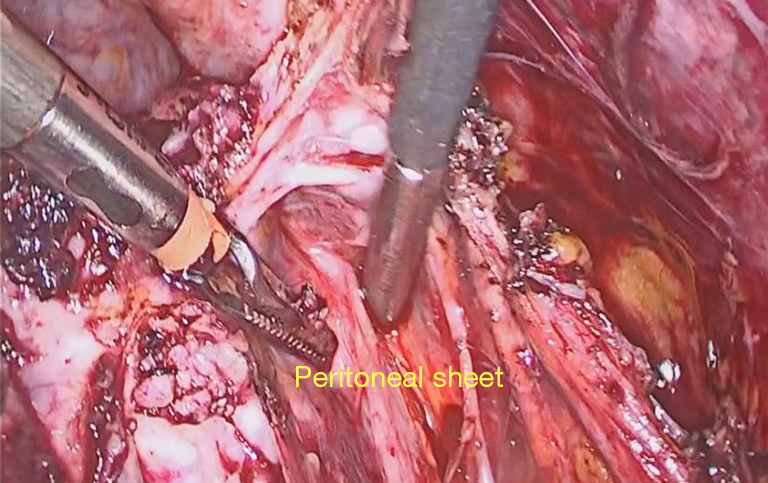 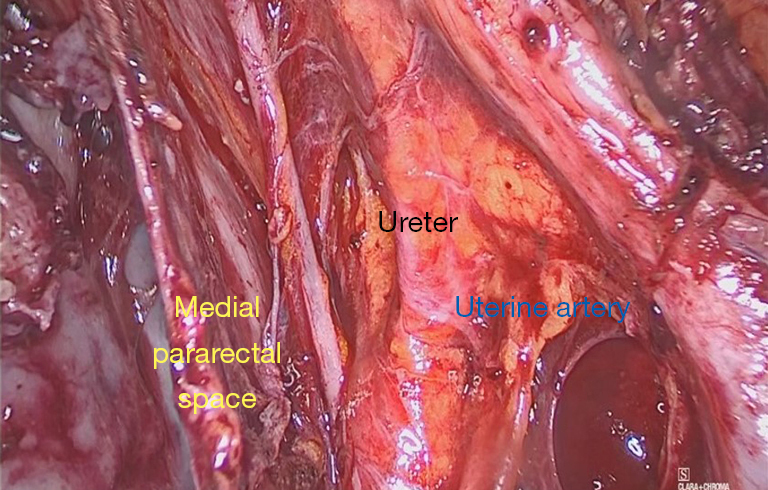 Figure 8 Final aspect of the surgical field after complete detachment of the mass.

Hemostasis is guaranteed via bipolar coagulation and repeated washings are performed. The fascia and peritoneum are closed at the 10-mm port with continuous suture using a delayed absorbable suture. The skin is closed using an absorbable monofilament suture.

Total operative time was 240 minutes and estimated blood loss was about 50 mL. No peri-operative complications have been observed and the patient has been discharged 3 days after surgery. Final histology showed bilateral ovarian localization of clear cell high grade carcinoma, and final FIGO stage was IB. As decided into the institutional tumor board, 30 days after surgery, 6 cycles of adjuvant platinum-based chemotherapy were administered. After 20 months, no evidence of recurrence has been observed during follow-up visits.

The possibility of encountering an ovarian malignant tumor during operative laparoscopy is the major concern about the laparoscopic management of ovarian cysts. Many recommendations have been proposed to reduce the risks related to the laparoscopic treatment of ovarian masses, such as the minimization of tissue trauma, the use of protective bags, the rinsing of the trocars before insertion and when interchanging, and the closure of peritoneal defects when using larger trocars (6). During a classic laparoscopic adnexectomy the procedure is performed without retroperitoneal access, and the anatomical structures are identified transperitoneally. Peritoneal surfaces are not developed, and the manipulation of the mass can be obtained only with direct tractions. For these reasons, retroperitoneal dissection has been proposed as a technique able to reduce the risk of cyst rupture. In fact, the extraperitoneal approach to adnexectomy allows the possibility to remove the ovaries without manipulating the mass, making safe traction on the posterior pelvic peritoneum, which becomes a sheet under the mass, especially if a firm ovarian cyst or adhesions are present (8).

The detachment of the ureter from the posterior pelvic peritoneum, could also allow the removal of the mass en bloc with the peritoneum, reducing the risks of rupture due to the lysis of adhesions between the mass and the peritoneal surface. Moreover, the complete isolation of the ovarian vessels from the ureter, obtained through the extraperitoneal approach, provides a longer part of infundibulo-pelvic to be coagulated, avoiding unexpected bleeding, difficult to control for the cranial retraction of the ovarian vessels after its section.

We would like to thank all the members of the staff of the Department of Gynecologic Oncology, University of Palermo, Palermo, Italy.

Conflicts of Interest: All authors have completed the ICMJE uniform disclosure form (available at http://dx.doi.org/10.21037/gpm-20-32). The series “Laparoscopic Surgery for Ovarian Cancer” was commissioned by the editorial office without any funding or sponsorship. The authors have no other conflicts of interest to declare.