The umbilicus was a natural cavity of the embryonic period, the scar is concealed by folds of skin. So, the laparoscopic surgery through the umbilicus can hide abdominal surgery scar. In 1981, Tarasconi (1) firstly reported 100 cases of endoscpic salpingectomy by monopolar electrocoagulation, the results showed this type of laparoscopic method can reduce the length of hospital stay time of surgery and surgical trauma. In 2005, Ghezzi (2) reported 10 cases of laparoscopic salpingectomy for treatment of tubal pregnancy were performed with single-port technique, the results showed that one-trocar salpingectomy is a feasible and safe technique. In 2009, Fader (3) reported 13 cases of laparoendoscopic single site (LESS) surgery in gynecologic oncology through both laparoscopic and robotic-assisted approaches. In 2012, Fanfani (4) reported 20 cases of LESS hysterectomy in low-risk early endometrial cancer. The results showed that LESS can represent a surgical option for extra-fascial hysterectomy, with the potential to further decrease invasiveness of the conventional laparoscopic approach. LESS has become a viable alternative to traditional laparoscopic surgery option, the cosmetic effect is the advantage of single port laparoscopy (5). In 2015, a multi-institution, prospective, randomized trial (6) to compare the success rates of single-port versus multi-port laparoscopic hysterectomy (LH) for treatment of uterine myoma and adenomyosis showed LESS is not inferior to multi-port LH in terms of conversion and/or complications rates, including transfusion. The main disadvantage was that all surgical devices in a single site. Due to limited operation space and lacking of triangulation, the devices produce “chopstick effect” (7). It takes a lot of practice to master the operation skillfully (8). In this case, we performed hysterectomy and bilateral salpingectomy under LESS (Video 1). We mainly want to share our surgical skills, which may overcome the difficulties and defects of single-port laparoscopic surgery, the ultimate goal was reducing the surgical risk, and ensuring the surgical effect.

We present the following case in accordance with the CARE reporting checklist (available at http://dx.doi.org/10.21037/gpm-20-64).

A 50-year-old female was admitted to hospital for “vaginal bleeding for 7 months, aggravated for 2 days”, she developed vaginal bleeding about 7 months ago, the quantity was 2 times of ordinary menstruation. The ultrasound showed: adenomyosis, the thickness of endometrium was 7 mm. Hysteroscopy showed no obvious abnormalities, endometrial pathology revealed: endometrial hyperplasia. She was treated with levonorgestrel-releasing intrauterine system (LNG-IUS). There was no improvement in symptoms. Two months ago, the LNG-IUS was taken out, combined oral contraceptive (Yasmin) was taken. But the amount of withdrawal bleeding was more than 2 times of the normal menstrual. After admission, the ultrasound showed: adenomyosis, the thickness of endometrium was 5 mm. The blood routine examination suggested moderate anemia, the diagnosis was abnormal uterine bleeding-adenomyosis (AUB-A), and moderate anemia. The operation was performed on August 10. Operation manner: single-port LH and bilateral salpingectomy. Operation time: 1 hour and 45 minutes, intra-operative blood loss: 30 mL. Gastrointestinal function recovered at 18 hours after the operation. Pathology showed: adenomyosis, endometrial hyperplasia. Three days after the operation, the patient was discharged from hospital. She no longer experienced bleeding till now.

All procedures performed in studies involving human participants were in accordance with the Helsinki Declaration (as revised in 2013). Informed consent was obtained from the patient for publication of this manuscript and any accompanying images.

After general anesthesia, the patient underwent the surgery in a cystolithotomy position. We set the buttocks higher than the head. Then made the longitudinal incision at the middle of navel about 1.5–2 cm. The single-port access platform (Figure 1A) was inserted into the abdomen under direct view, and CO2 was charged. Intra-peritoneum pressure was maintained at 10–12 mmHg. Before laparoscopic surgery, the uterine manipulation (Figure 1B) was placed into the cervix from the vagina. Uterine manipulation is helpful to expose the operation field, reduce the risk of ureter injury and reduce the difficulty of circumferential vaginal fornix. The surgical exploration of the pelvic and abdominal cavity revealed that the uterus was full, enlarged to 10+ weeks gestation, no adhesion, no abnormalities in bilateral adnexa. After double-check electrocoagulate mesosalpinx and isthmus of fallopian tube, bilateral fallopian tubes was transected with ultrasonic scalpel. The round ligament and utero-ovarian ligament was cut off at 2-cm point from the uterus attachment points. The anterior and posterior lobes of the broad ligament were separated laterally and stratified to the level of isthmus (Figure 2). The uterus bladder peritoneum reflex was opened, the bladder was pushed down from the lower uterine, cervix, and the upper 1 cm of the vagina. The uterine artery was distinguished, and the uterine vessels were cut off by ultrasonic scalpel after sutured by 2-0 stitches at the level of isthmus. The vagina was cut off by vaginal fornix, then the uterus was completely resected, and taken out via vagina together with the fallopian tubes. Then the vaginal wall was closed by suturing intermittently (Figure 3). Repeatedly wash pelvic cavity and abdominal cavity and observe peristalsis of the ureter. 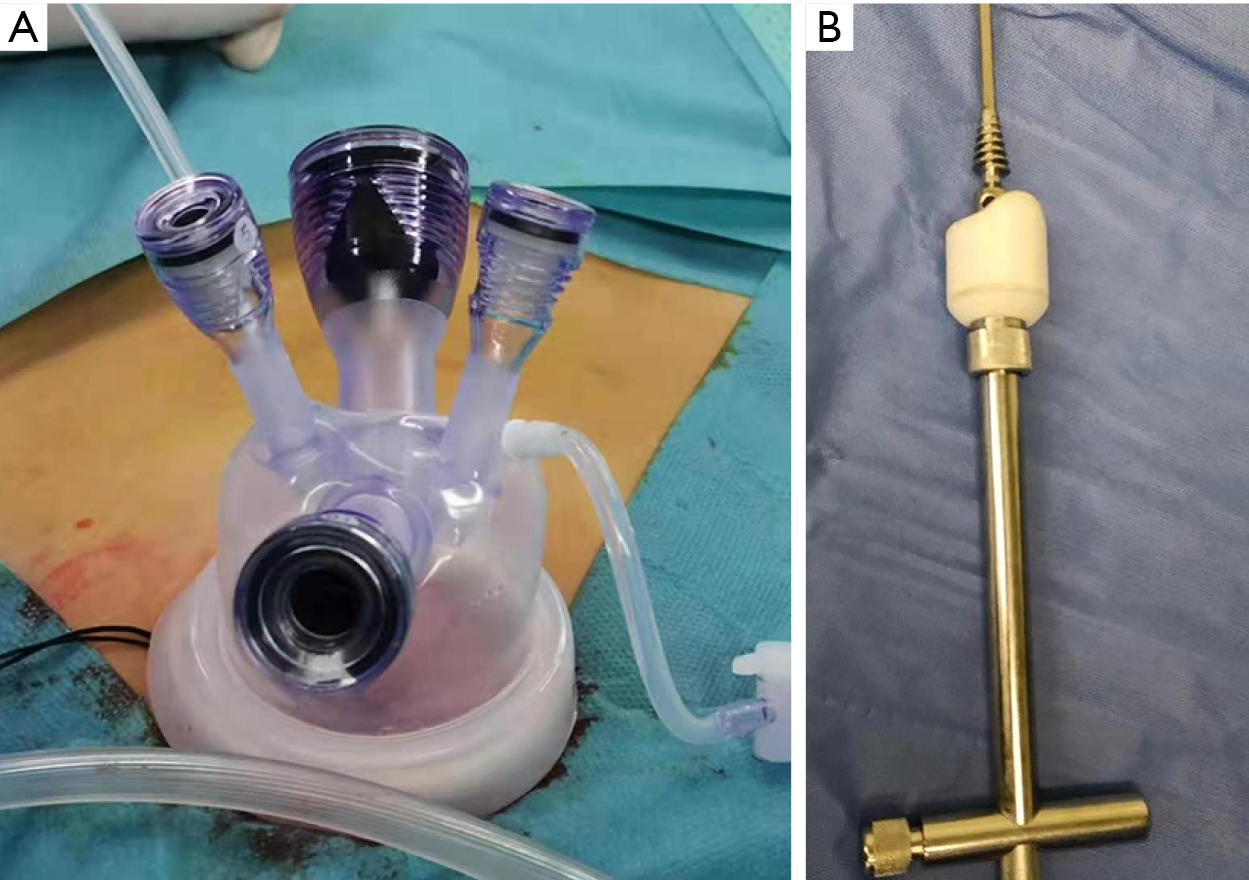 Figure 1 The instruments used in the operation: the single-port access platform (A); the uterine manipulation (B). 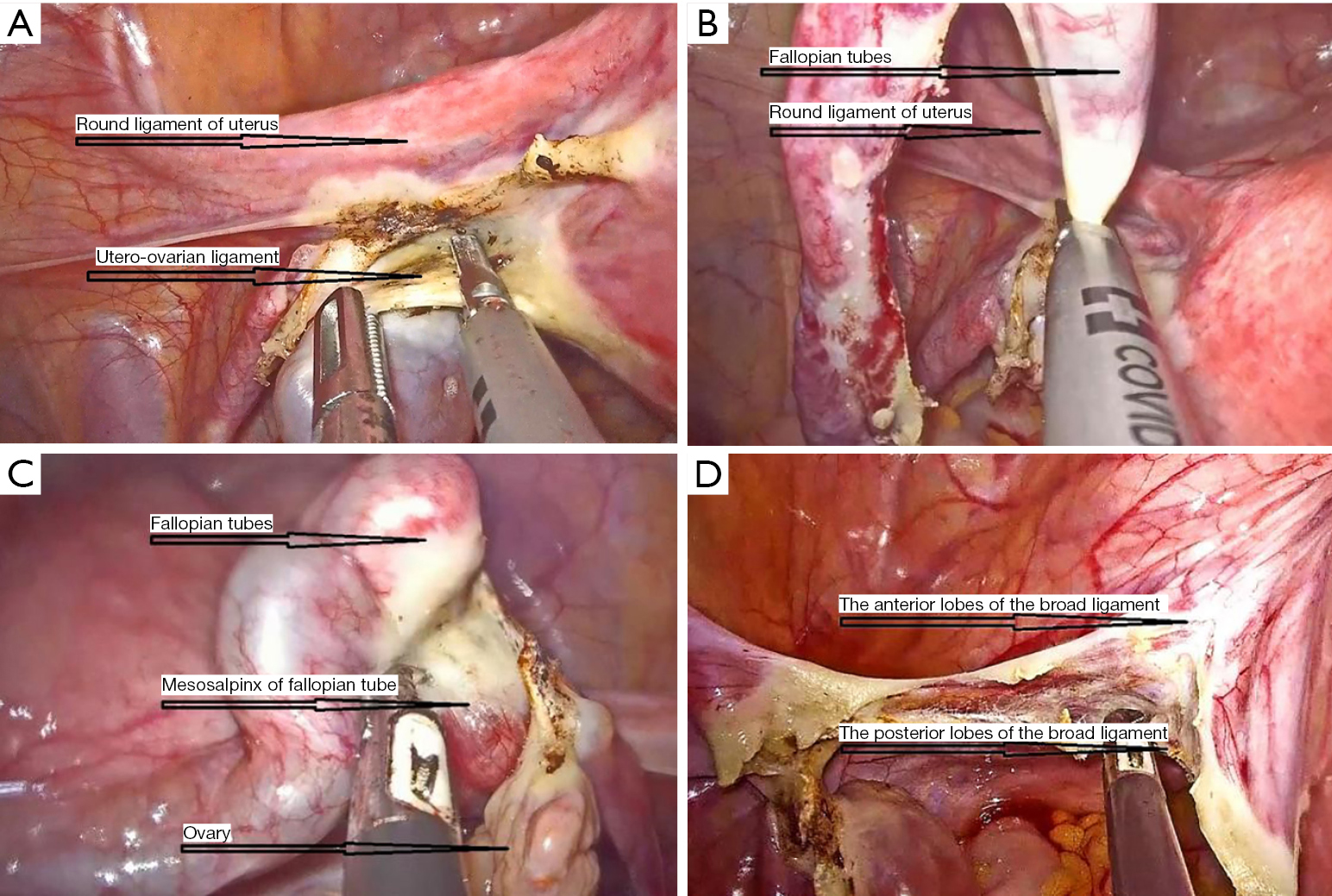 Figure 2 Double-check electrocoagulate mesosalpinx and isthmus of fallopian tube (A); fallopian tubes were transected with ultrasonic scalpel (B); the utero-ovarian ligament was cut off at 2-cm point from the uterus attachment points (C); the anterior and posterior lobes of the broad ligament were separated laterally and stratified to the level of isthmus (D). 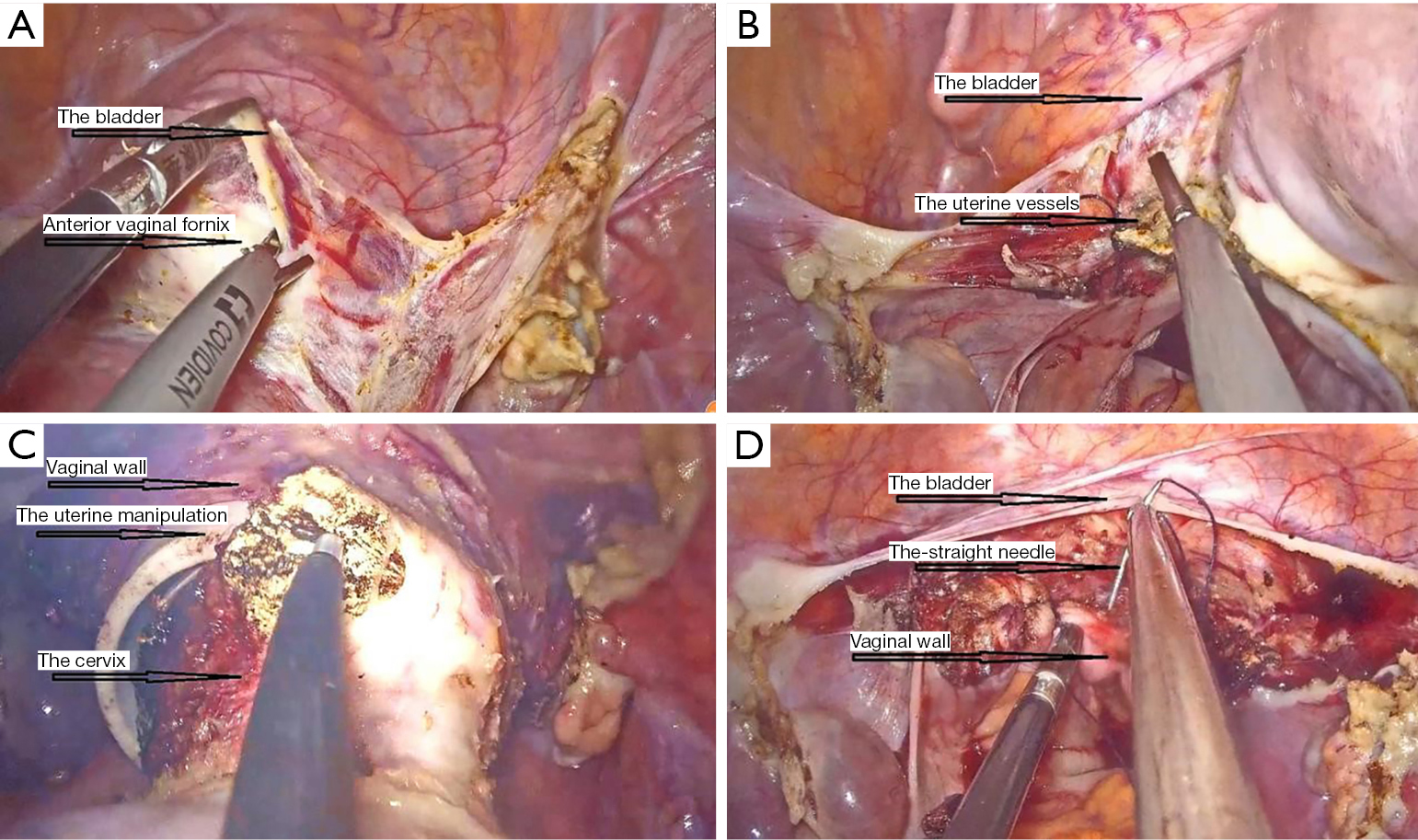 Figure 3 The bladder was pushed down from the lower uterine, cervix, and the upper 1 cm of the vagina (A); the uterine vessels were cut off by ultrasonic scalpel after sutured by 2-0 stitches at the level of isthmus (B); the vagina was cut off by vaginal fornix (C); the vaginal wall was closed by suturing intermittently (D). 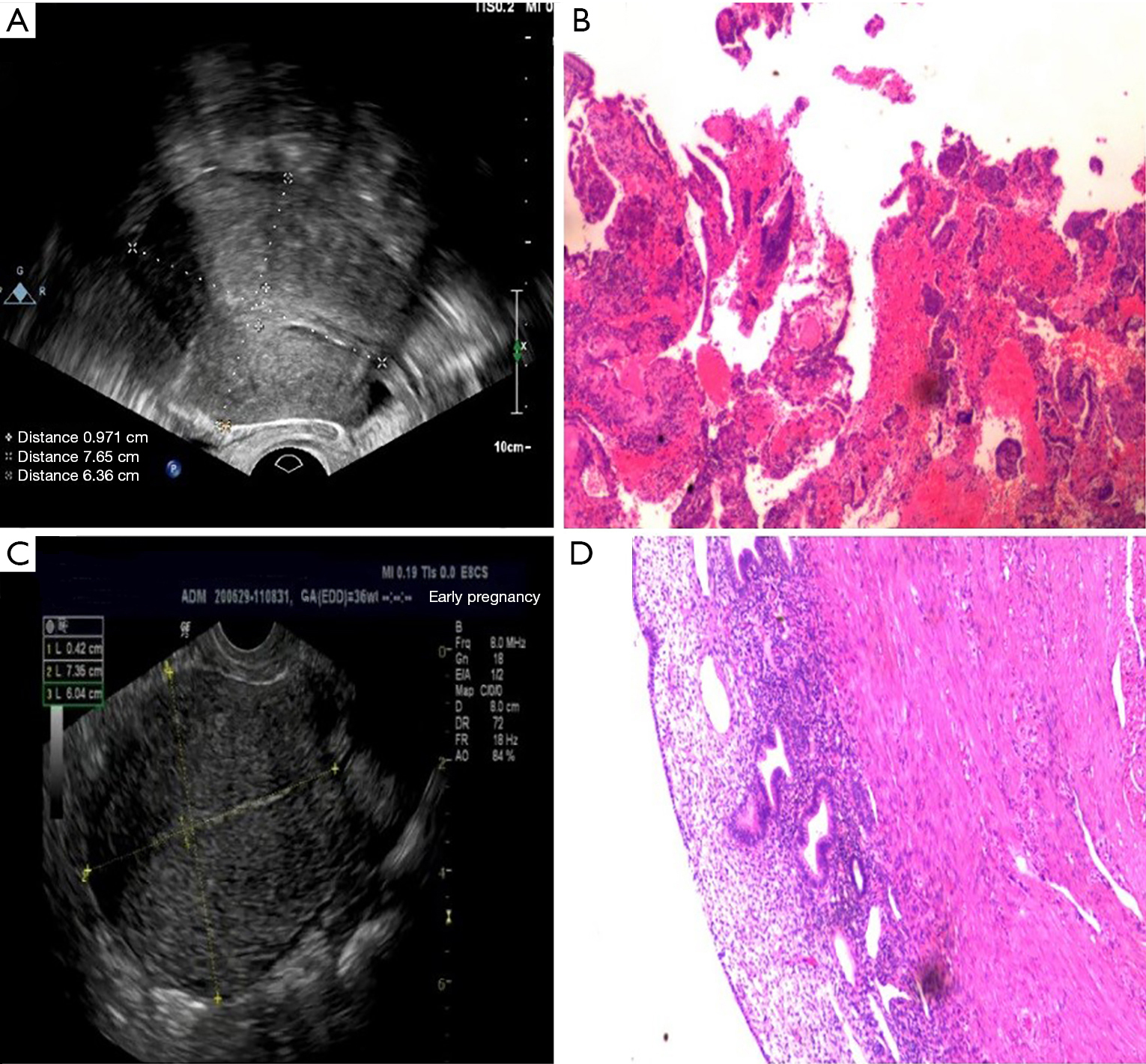 In 1969, Wheeless (9) firstly reported 25 patients were surgically sterilized by electrocauterization and excision of a portion of each fallopian tube through the fiber optic laparoscopic, it marked the beginning of the era of LESS. In 1992, Pelosi (10) firstly reported LESS for multiple organs surgery, it’s the first systematic description of trans-umbilical single-site laparoscopic surgery has the advantages of simplicity, reduction of trocar related complications. It also suggests the possibility of transit to standard laparoscopy or open surgery. In 2013, Song (11) reported 21 cases of single-port access total LH for large uterus, the result showed LESS for large uterus is a feasible and safe technique. After nearly 30 years of development, LESS can complete most gynecological surgery, but there’s not enough evidence-based medical evidence to prove its safety and effectiveness. In 2011, a review (12) about LESS show improvements in traditional laparoscopic techniques and availability of more advanced instruments has made LESS more feasible and safer for the patient. Although LESS surgery provides another option in the arena of minimally invasive gynecologic surgery, the ultimate role of this approach remains to be determined, under the current medical conditions, benign disease should be the main indication of LESS (13,14). However, LESS has its inherent limitations (14); for example; the operating triangle is lost, interference between operating instruments (15), the limits of vision, special learning curve, here we report a case of modified surgical procedures and techniques to overcome the inherent limitations in LESS, successful completed the surgery of total hysterectomy and bilateral salpingectomy for a patient with AUB-A, the operation take 1 hour 45 minutes, 30 mL of intraoperative bleeding, no complications, the operation was satisfactory. 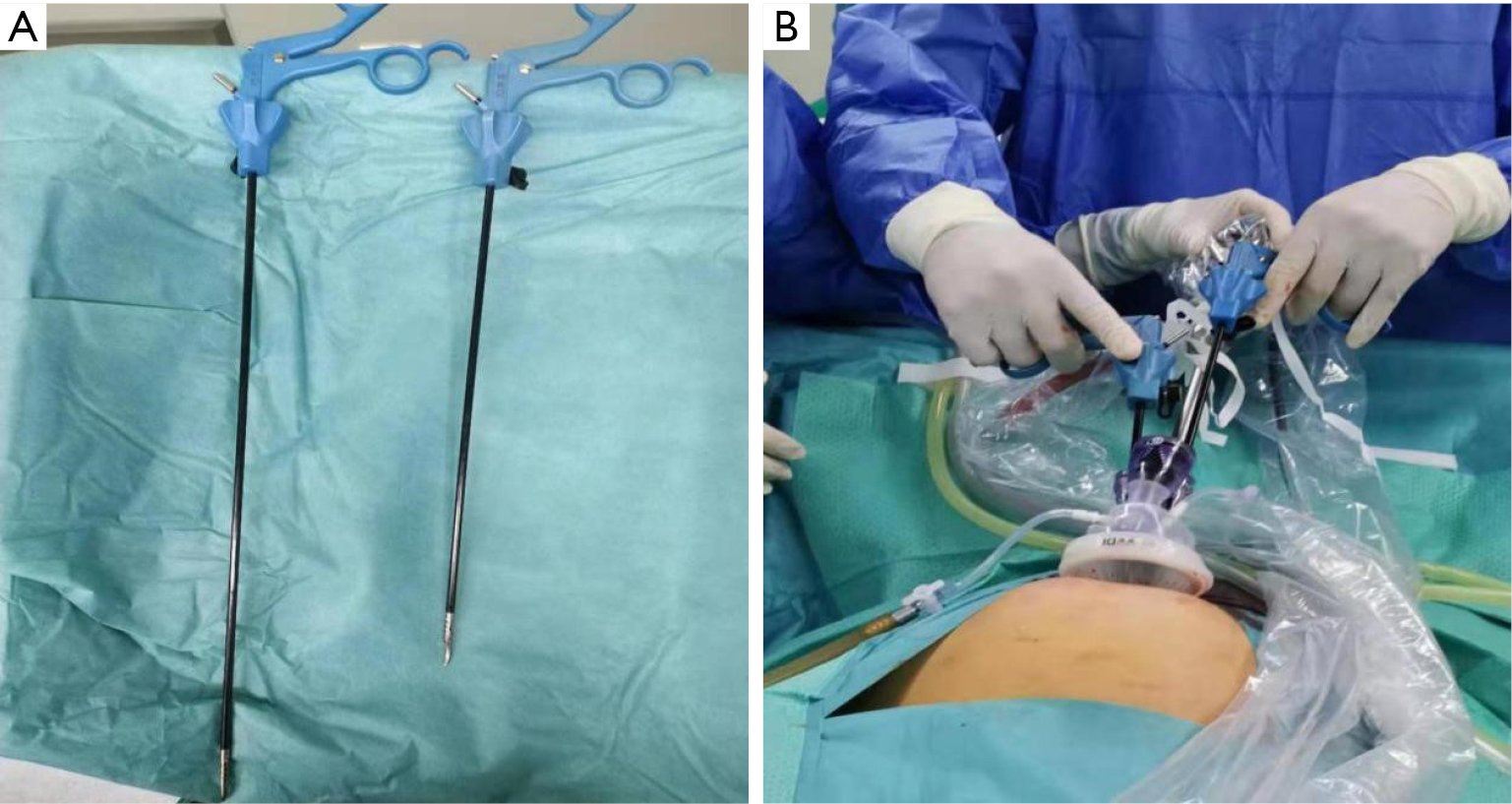 Figure 6 Use different lengths of surgical devices to reduce the mutual interference between them.

(II) The ascending branch of the uterine artery is attached to the uterine lateral wall, in order to avoid damaging the branches of the uterine artery and reducing the intra-operative bleeding. We can inherent the round ligament, fallopian tubes and utero-ovarian ligament away from the uterus, the distance should more than 3 cm (Figure 7). The mesosalpinx of fallopian tube is rich in vascular plexuses, before transect fallopian tube, carefully electric coagulate is necessary. Considering the accurate hemostatic effect, uterine vessel should be stitched before transected, also can reduce the risk of re-opening of the postoperative blood vessel ending.

Figure 7 Inherent the round ligament (A) and utero-ovarian ligament (B) away from the uterus.

(III) Suturing and knotting is the basic of surgical operation. Proficient in using the technology was essential for the operation (17). The LESS operation is deficient in “operating triangle”. So, the devices may interfere each other. It is very difficult to suture and knot under single-port laparoscopic surgery, that is the main reason which constraint the development of LESS. Our solution to this problem is straight needle and vertical suturing, which we suppose, may effectively overcome these difficulties and ensure the completion of the suturing. When it comes to tying the knot, we used a right-angle forceps to create a “small operating triangle” to make it easier (Figure 8).

Figure 8 The method of straight needle and vertical suturing (A) and right angle forceps to create a “small operating triangle” to knot (B).

LH and bilateral salpingectomy were a main therapy for adenomyosis, which was poor effect to medicine treatment. For the requirement of rapid recovery and cosmetic results, single-port laparoscopic approach may be a better choice. The greatest difficulty of LESS is the limitation of operating space. We adopted an integrated mirror with optical fiber camera to reduce the interference, and used different lengths of surgical devices. we used a straight needle to suture and right-angle forceps to knot. These surgical skills may overcome the difficulties and defects of single-port laparoscopic surgery, could make the operation more convenient. But the ultimate role of this approach remains to be determined.

Provenance and Peer Review: This article was commissioned by the editorial office, Gynecology and Pelvic Medicine for the series “Award-Winning Videos from the Second International Elite Gynecologic Surgery Competition (2020 Masters of Gynecologic Surgery)”. The article has undergone external peer review.

Reporting Checklist: The authors have completed the CARE reporting checklist. Available at http://dx.doi.org/10.21037/gpm-20-64

Conflicts of Interest: All authors have completed the ICMJE uniform disclosure form (available at http://dx.doi.org/10.21037/gpm-20-64). The series “Award-Winning Videos from the Second International Elite Gynecologic Surgery Competition (2020 Masters of Gynecologic Surgery)” was commissioned by the editorial office without any funding or sponsorship. The authors have no other conflicts of interest to declare.

Ethical Statement: The authors are accountable for all aspects of the work in ensuring that questions related to the accuracy or integrity of any part of the work are appropriately investigated and resolved. All procedures performed in studies involving human participants were in accordance with the Helsinki Declaration (as revised in 2013). Informed consent was obtained from the patient for publication of this manuscript and any accompanying images.