Uterine adenosarcoma (UAS) is a rare female genital tract malignancy accounting for 5–9% of uterine sarcomas and only about 0.2% of all uterine neoplasm (1,2).

It is considered a biphasic tumor because of the presence of benign epithelial elements combined with a malignant mesenchymal component (3,4). Since that the latter is typically low-grade, adenosarcoma is considered lesser aggressive than its epithelial counterpart, uterine carcinosarcoma.

Unfortunately, given the extreme rarity of this subtype of neoplasm, there are limited data in literature to help decision making in clinical practice, and the most data we have available derived from retrospective case series and shared clinical experiences.

Herein we present an updated literature review on the current management of UAS, focusing on the role of not only medical but also surgical treatment, in order to improve outcomes of patients affected by this extremely rare disease.

We present the following article in accordance with the Narrative Review reporting checklist (available at http://dx.doi.org/10.21037/gpm-20-81).

Information used to write this paper was collected from the sources listed in Table 1. 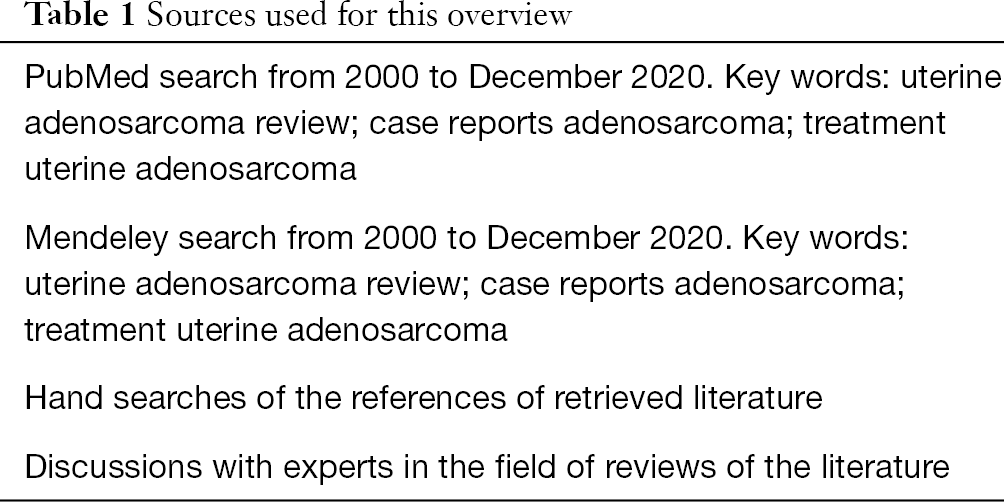 Adenosarcoma mostly involves uterus, but it can arise from other tissue such as ovaries, cervix, vagina, fallopian tubes, and pelvis particularly in a contest of endometriosis (5-9). More rarely adenosarcoma can also involve extrapelvic sites (10-18).

Although it has been initially described as an advanced age tumor, the pick of incidence is around the fifth and sixth decades, with no significant difference in ethnicity (1,19,20).

Among the risk factors, endometriosis seems to play an important role, although a certain connection is not yet established. In a group of 1,000 patients with proved endometriosis, a cancer incidence of 5.5%, particularly endometroid carcinoma, but also clear cell carcinoma and adenosarcoma have been reported (21). A molecular mechanism leading to this malignant transformation is not completely understood. A repeated DNA damage from oxidative stress caused by menstruation, and consequential iron overload could be involved (22).

Previous pelvic irradiation and treatment with tamoxifen or other estrogen-modulating agents, maybe due to endometrial partial estrogen agonist effect, may represent an additional risk factor of adenosarcoma (23-33).

Since that UAS usually present as a polypoid mass within the uterine cavity, the most common clinical presentation is an abnormal uterine bleeding, observed in about 65–76% (3,23,34).

Other symptoms are pelvic pain or pelvic mass, vaginal discharge, abdominal discomfort and distention, especially for ovarian adenosarcoma, that can reach large size, even up to 50 cm (35).

According to 2009 FIGO staging, which represents the current staging system for adenosarcoma, the presence of myometrial invasion as well as the extent of disease outside the uterus determine the stage of disease (36).

The incidence of local and distant recurrences over a period of about 10 years varies from 14.3% to 45% and it is higher in patients with the presence of sarcomatous overgrowth (23,37).

It generally recurs locally, such as for ovarian adenosarcoma, but also with distant metastases (especially lung and liver).

Microscopically, adenosarcoma is represented by a benign glandular epithelial component and a malignant mesenchymal component, characterized by spindled cells surrounding glands in the form of peri-glandular cuffs characterized by cellular atypia and high mitotic activity (2,38).

A mitotic rate (at least 2 per 10 high-power fields) is necessary to make the diagnosis of adenosarcoma according to the WHO criteria. Ki67 index is usually under 5%, increasing to 20% in peri-glandular cuffs.

The presence of a sarcomatous overgrowth, intended as more than 25% of the tumor composed of pure sarcoma, is the most important histological prognostic factors in adenosarcoma and it is directly related to the grade of disease (3,23,39).

Few studies on molecular biology of adenosarcomas are available. Currently no differences in mutational profile between adenosarcoma with or without overgrowth have been described, even if the cases with sarcomatous overgrowth presented an higher copy number variations (42,43).

MDM2 and CDK4 genes amplification as well as alterations in the PIK3CA/AKT/PTEN pathway have been commonly observed. TP53 mutation, even if rare, are often related to sarcomatous overgrowth and consequently associated with aggressive clinical behavior (43).

The standard of care for localized UAS is total hysterectomy (2,38,44). Local excision could be reserved in case of desire of fertility preservation in very selected reproductive-age women without myometrial invasion and without sarcomatous overgrowth tumors (45).

Because of the incidence of the local tumor spread to the adnexa and ovaries (17% and 8% respectively), as well as the known frequent expression of ER and PR, bilateral salpingo-oophorectomy (BSO) is strongly recommended (3,46,47).

There is no evidence in favor of lymphadenectomy in addition to hysterectomy, since that the incidence of lymph node metastases in adenosarcoma is around 2.9% and the impact of lymphadenectomy upon survival is still unclear (48).

About surgery and HIPEC only two cases have been reported in literature, showing little benefit as a salvage therapy (49).

Long-term follow-up of the patients is recommended giving the risk of late recurrence over a period of about 10 years.

Although the National Compressive Cancer Network (NCCN) uterine cancer guidelines recommend adjuvant radiation in patients with stage II to IVa high-grade endometrial stromal sarcoma, there are no data about the efficacy of radiation therapy in UAS (46).

The role of neoadjuvant and adjuvant chemotherapy in this disease is still controversial. Given the rarity, adenosarcoma cases have been often included in trials with other uterine mesenchymal malignancies, therefore clinical trials on adjuvant treatment for adenosarcoma only lack.

Currently, the benefit of adjuvant chemotherapy on progression-free survival for adenosarcoma is only documented in some case reports using different regimens (3,50-62) (Table 2). 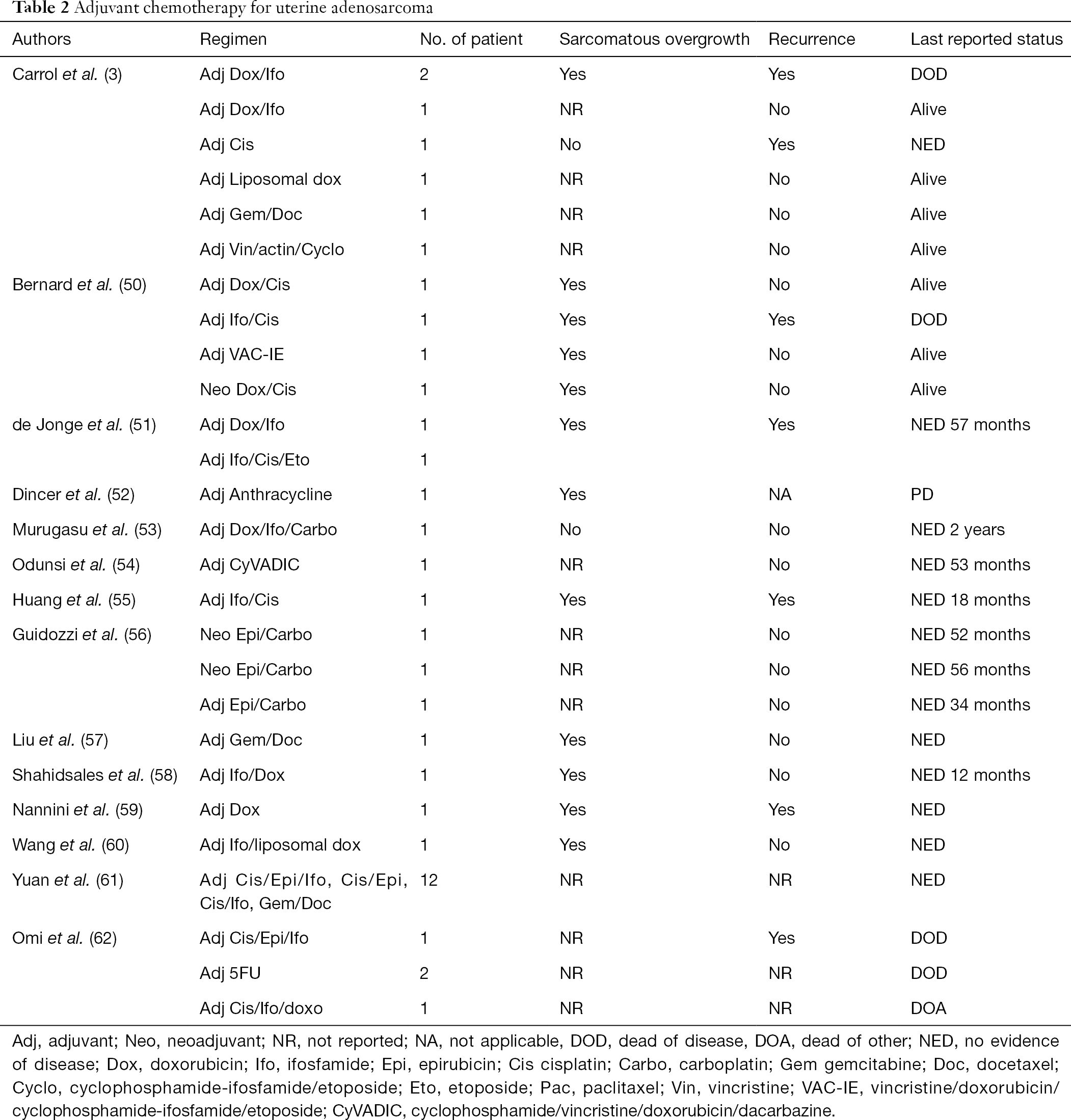 Although adjuvant therapy is generally not recommended, it could be considered in patients with high risk of recurrence, due to presence of myometrial invasion or/and sarcomatous overgrowth, by a shared decision-making process. Conversely, for patients at low risk of disease relapse, the strategy of choice should be observation alone (63).

The ER/PR positivity could be used as predictive biomarkers for response to hormonal therapy, but currently, the evidence is limited to only case and series reports both in adjuvant and the recurrent/metastatic setting. In the latter, responses between 10 months to 7 years have been reported (3,64-67).

Nathenson et al. described a stable disease and an improved survival for 4 patients treated with GnRh agonist and aromatase inhibitors for 2 to 15 years but these data are insufficient to determine the benefit of hormonal therapy in a larger population (69).

Treatment for advanced or metastatic disease

In the most cases adenosarcoma tends to recur locally, within the pelvis and abdominal cavity. Two larger case series showed a local recurrence in 22% of 74 patients to 42% in 100 patients respectively (3,23). Distant metastases, mainly localized in the lung and liver, but also involving bone, kidney, spleen and more rarely the brain, are less common.

Although there is no a standard approach for recurrent/metastatic disease, the management of advanced/metastatic adenosarcoma is generally medical (chemotherapy and hormonal therapy), even if surgery could be an option when feasible in selected cases. Radiation has a role of palliation in symptomatic cases.

The role of secondary surgery has been supported by two case series: a median OS of 58.4 vs. 30.1 months (HR 0.68), in the 62% of 32 recurrent patients underwent surgical cytoreduction have been shown (3); moreover, an increased time to second recurrence for patients who undergo a second surgery (29.7 vs. 12.7 months) have been reported in a second series (47).

Therefore, in case of isolated local recurrence, surgical resection could be recommended.

Regarding chemotherapy, in case of locally or distant recurrences, case reports and case series described responses with the use of doxorubicin-based regimens (47,55,70-73), gemcitabine/docetaxel (34,47) and trabectedin (74), which generally are the standard treatments for uterine sarcomas (Table 3). 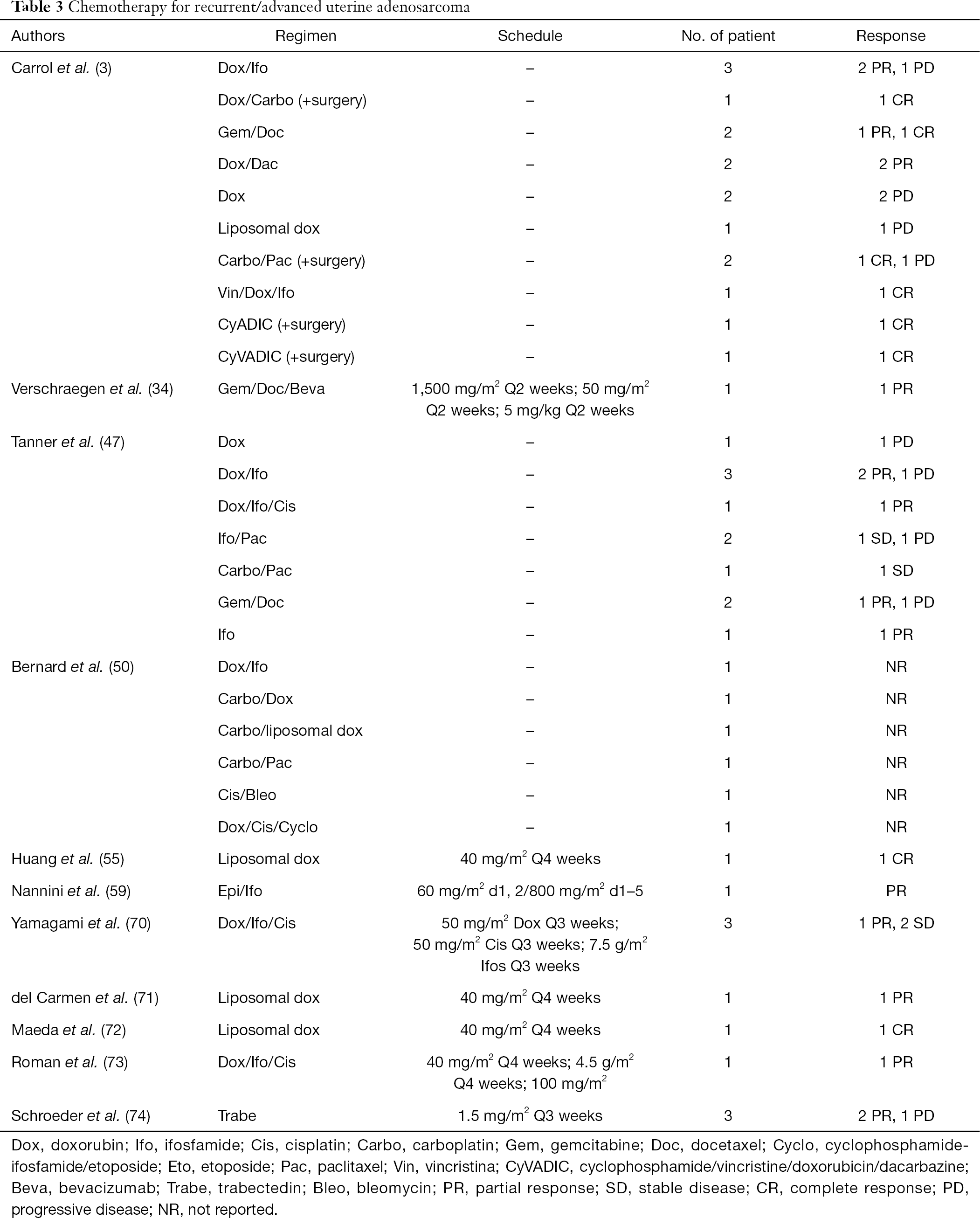 Nathenson et al. showed, in a large retrospective report about the use of systemic chemotherapy in recurrent UAS, a longer PFS (15.4 months) in patients treated with the association of doxorubicin and ifosfamide compared to doxorubicin alone or other regimens (69).

Doxorubicin/ifosfamide seems to have advantages also to reduce tumor size prior to surgery of recurrent disease. Whereas gemcitabine/docetaxel should be used in older patient or patient with comorbidities.

There are no prospective comparison studies about the efficacy and response of these regimens but there could be a benefit in OS by a sequential and integrated approach (surgery, hormonal therapy or further chemotherapy). Indeed, Nannini et al. reported a case report of a patient with advanced adenosarcoma at the time of diagnosis, treated with emergency simple hysterectomy, followed by chemotherapy with epirubicin/ifosfamide and, after an early radiologic response with marked shrinkage, underwent radical surgery with a complete response (59).

Adenosarcoma is a rare form of uterine sarcoma composed from a dual component (benign epithelial and malignant mesenchymal) mainly involving uterus but also other pelvic or peritoneal tissues.

Given the extreme rarity of this neoplasm, in clinical practice the management of adenosarcoma is still based on limited data and shared experiences of single centers data (Figures 1,2). 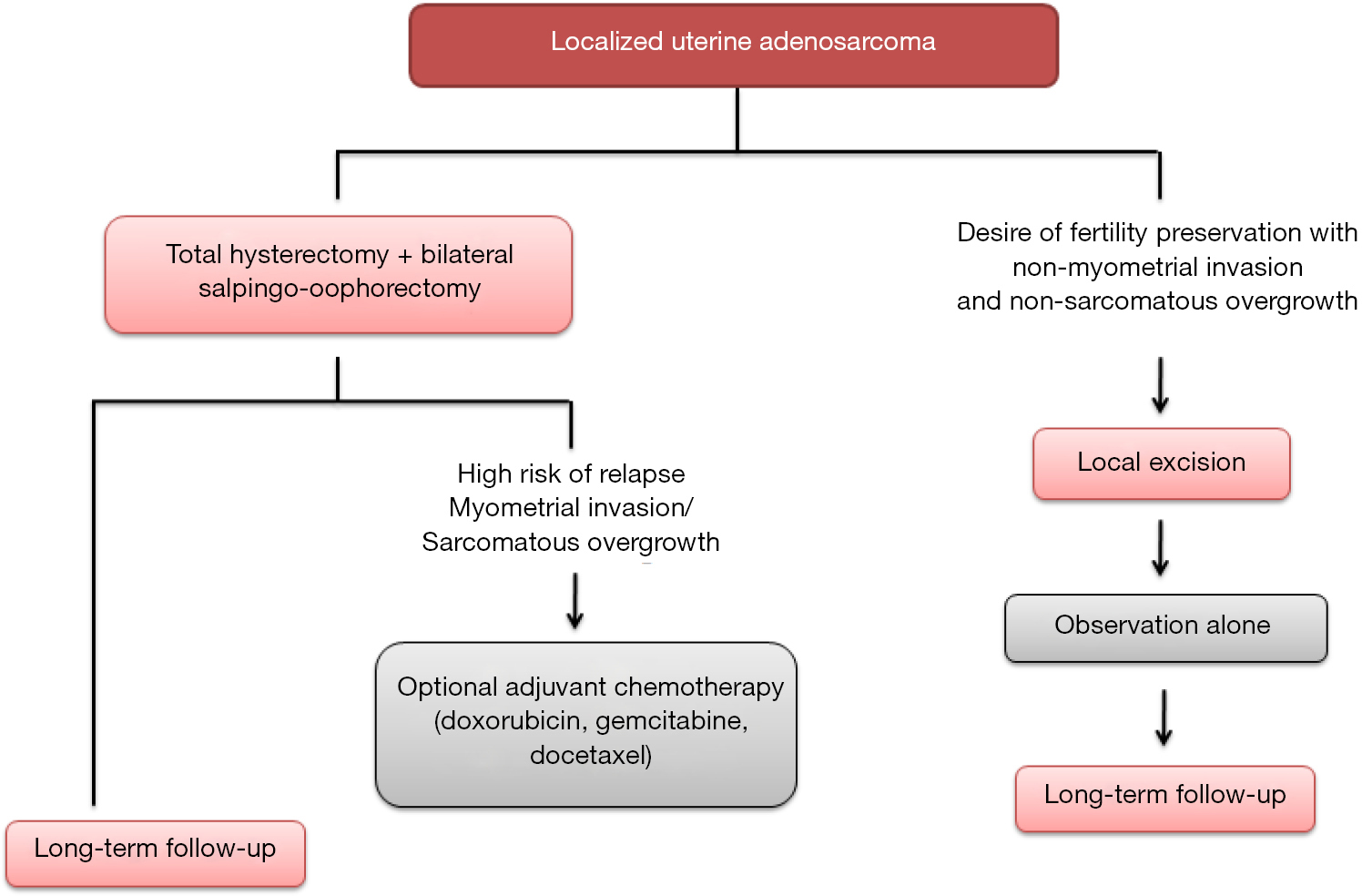 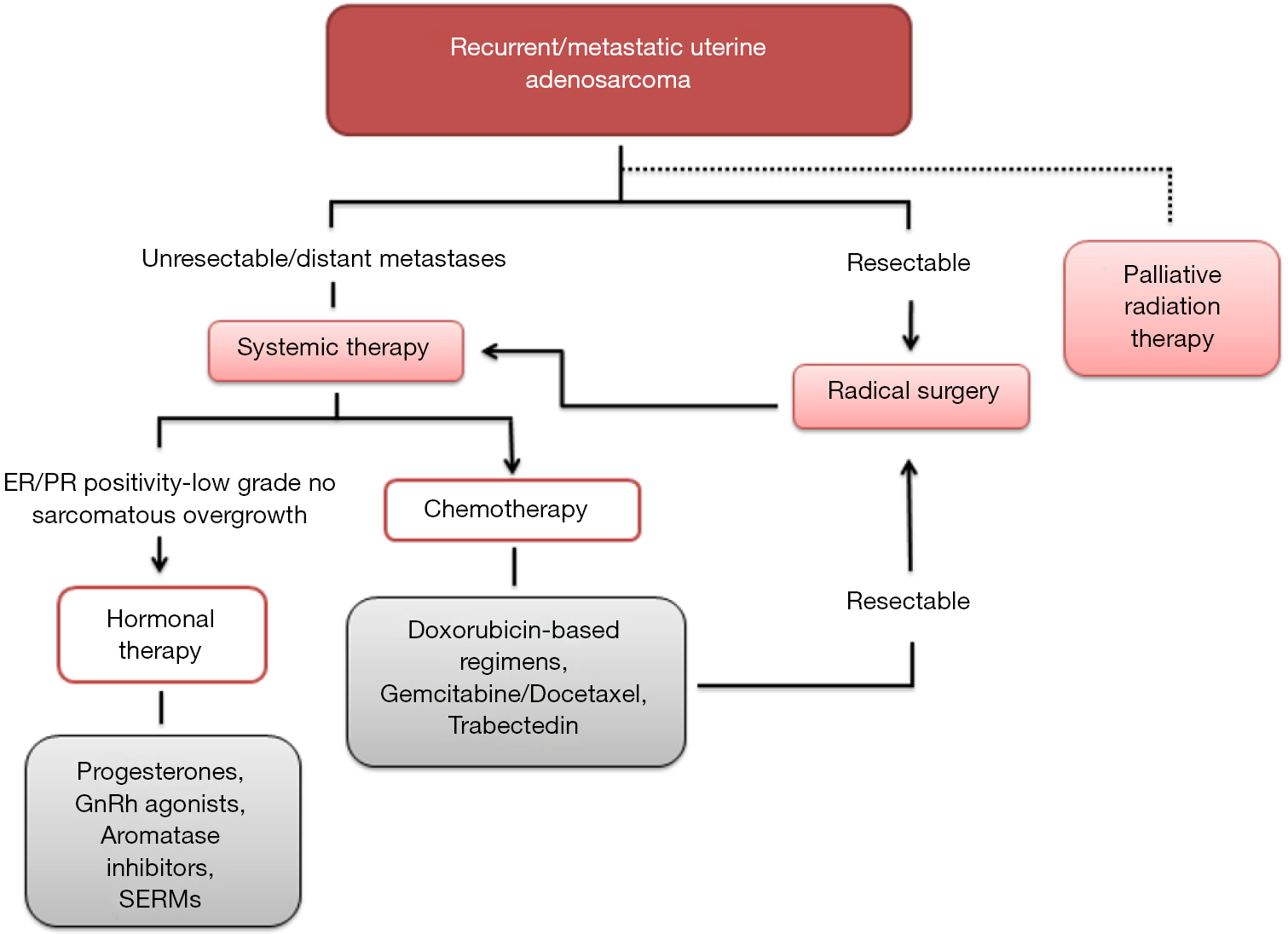 Additional data are needed to better understand the molecular background and clinical behaviors of this rare disease and improve patient outcomes with more tailored medical treatments.

Provenance and Peer Review: This article was commissioned by the Guest Editors (Anna Myriam Perrone and Pierandrea De Iaco) for the series “Uterine Sarcomas” published in Gynecology and Pelvic Medicine. The article has undergone external peer review.

Conflicts of Interest: All authors have completed the ICMJE uniform disclosure form (available at http://dx.doi.org/10.21037/gpm-20-81). The series “Uterine Sarcomas” was commissioned by the editorial office without any funding or sponsorship. The authors have no other conflicts of interest to declare.