Sonographic imaging in uterine sarcoma: a narrative review of literature

Median age at diagnosis, for all histological types of sarcoma, is 60 years old (5). Risk factors are advanced age and postmenopausal status (6). In the majority of uterine sarcomas diagnosis is incidentally carried out during surgery or at pathology in patients with sonographic suspicion of fibroids. More rarely diagnosis is achieved hysteroscopically of an intracavitary mass.

Pathological diagnosis of uterine sarcoma has always been difficult because many benign variants of smooth muscle tumors can simulate sarcomas, also ultrasound has difficulty in distinguishing a myoma from a sarcoma.

In past, several retrospective papers were published (7-19). These studies present few cases and ultrasound markers have never been coded. The correct differential diagnosis between benign myoma and sarcoma is mandatory for a correct surgical treatment.

In 2019 Ludovisi et al. published a series of 195 cases. This study proposes ultrasound markers associated with clinical symptoms and signs (7).

Due to the rarity of this condition, no prospective studies on the role of preoperative ultrasound have been performed. The objective of this review is to focus on the role of ultrasound in diagnosis of uterine sarcoma. We present the following article in accordance with the Narrative Review reporting checklist (available at https://gpm.amegroups.com/article/view/10.21037/gpm-21-20/rc).

We searched publications related to the ultrasound diagnosis, clinical and pathological features of uterine sarcomas in PubMed, without time restrictions. Only studies in English were included. Full text of all articles was analyzed by three authors and after discussion, these authors selected the studies useful for the drafting of this work. Research on PubMed included: uterine sarcoma, ultrasound features, pathological features, diagnosis. We excluded studies that exclusively treated uterine carcinosarcomas, because they have been reclassified as a dedifferentiated form of endometrial carcinoma.

According to 2011 Word Health Organization (WHO) sarcomas comprise three main histotypes (leiomyosarcoma, endometrial stroma sarcoma, and undifferentiated endometrial sarcoma) that have some characteristics in common but, at the same time, they differ from each other.

Leiomyosarcomas result the most common subtype of uterine sarcomas, even if they represent only 1–2% of the malignant tumors of the uterus (20). The median age of women at diagnosis is 50–57years (3,7,21,22). Leiomyosarcomas have a poor prognosis even when diagnosed in the early stages. (4,23,24). Symptoms of leiomyosarcomas include abnormal uterine bleeding in pre- and post-menopause, pelvic pain, pressure, but these symptoms are the same as in benign myoma. Constipation and a foul-smelling vaginal discharge have been reported (5).

The correct preoperative diagnosis is most important, because an incorrect treatment such as morcellation of the sarcoma or tumor-positive resection margins significantly worsens the prognosis (33). Correct preoperative diagnosis of sarcoma may be difficult. Ultrasound examination, magnetic resonance imaging, computed tomography and positron emission tomography are not reliable in all cases (Figure 1). Ultrasound examination is the first approach, because ultrasound examination is easy to perform, requires no preparation and it is low cost. Symptoms and ultrasound features are often confused with those of benign uterine lesions (uterine myoma) or of other neoplastic lesions (endometrial cancer). In Figure 2 is shown an image of a leiomyosarcoma with ultrasound features of a benign lesion (Figure 2). The first large published series has described the clinical and ultrasound characteristics of 195 sarcomas (7), before several studies were published, but they described few cases, for example, the largest published series of leiomyosarcomas includes eight cases (8). In these studies, the ultrasound variables evaluated were different and often leiomyosarcomas, endometrial stromal sarcomas and undifferentiated stromal sarcomas were not described separately (8-19). In agreement with Exacoustos, Ludovisi et al. described that leiomyosarcomas are large (largest diameter 106 mm) and solitarian lesion, even if they may coexist in same uterus with benign myomas. Leiomyosarcomas are solid mass with inhomogeneous echogenicity with irregular border and irregular cystic areas in half of the cases. Vascularization was minimal or absent in one third of the leiomyosarcomas, in contrast to previous publications (8), probably linked to intra-lesional necrosis (Figures 3,4). Intravenous contrast-enhanced color flow Doppler is an emerging technique in gynecological ultrasound. A prospective study by Lieng suggest that intravenous contrast may help to discriminate between benign endometrial polips and cancer (34). A recent pilot study on a small cohort of patients (35) investigated the use of contrast-enhanced ultrasound for the differential diagnosis of uterine leiomyoma subtype and sarcoma. This study describes an uneven high enhancement without regular border associated with large areas of non-enhancement for sarcomas. Ludovisi et al. introduced a new parameter to describe solid tissue necrosis, defined as “cooked appearance”, a homogeneous avascular area with blurred borders (7) (Figure 5). Exacoustos et al. compared ultrasound features of cellular leiomyomas with those of uterine sarcomas and they demonstrated ultrasound characteristics of “classic” leiomyomas and cellular leiomyomas are different from those of leiomyosarcomas. 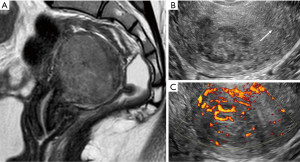 Figure 1 Imaging techniques used in the preoperative diagnosis of leiomysarcomas. (A) A MR image of a uterine leiomyosarcoma; (B) the same uterineleiomyosarcoma at ultrasound (the arrow indicates the shaded margin of the lesion); (C) the important vascularization of the lesion at power-Doppler. 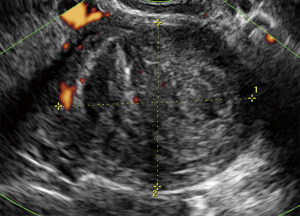 Figure 2 Leiomyosarcoma with ultrasound features of a benign lesion. 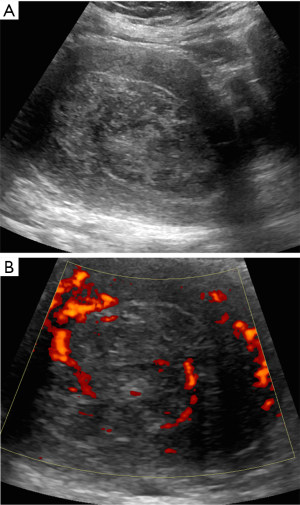 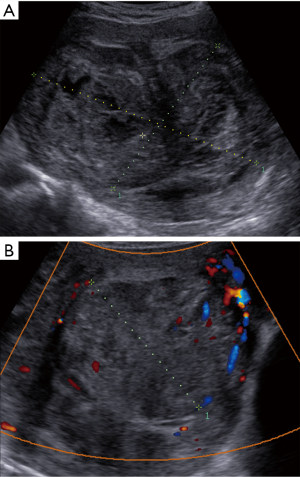 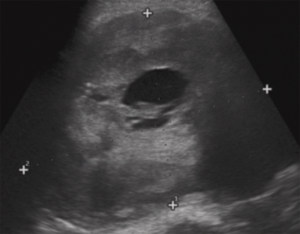 Figure 5 Example of leiomyosarcoma with “cooked appearance” of solid tissue. 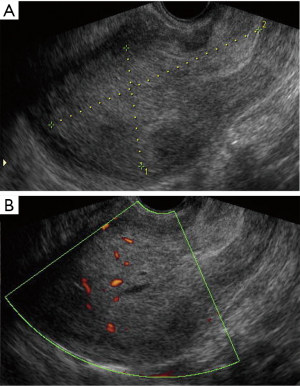 Figure 6 Gray scale ultrasound image of a stromal sarcoma (A) and corresponding power-Doppler vascularization (B).

Undifferentiated endometrial sarcomas appeared as solid, inhomogeneous lesions with an average diameter of 70 mm, with irregular border and rich vascularization (7).

In all types of uterine sarcoma, free fluid in pouch of Douglas was rarely found and only 2% of cases had ascites (7).

The correct diagnosis was made in approximately 80% of the 195 sarcomas and undifferentiated endometrial sarcomas were correctly diagnosed in 93% of cases. Sarcomas were classified as benign leiomyoma in 14% of cases (7).

In this review of literature, there is agreement on clinical symptoms, while there is disagreement on ultrasound characteristics. In all publications, where clinical manifestations were evaluated, approximately 90% of patients had symptoms. Abnormal vaginal bleeding and abdominal-pelvic pain were the most frequent symptoms. Most of the patients with leiomyosarcoma and undifferentiated endometrial sarcoma are in menopause, while those with endometrial stromal sarcoma are in premenopause in more than half of the cases. From the literature, undifferentiated endometrial sarcomas are more often recognized as malignant, while leiomyosarcomas and endometrial stromal sarcomas are diagnosed as benign in one fifth of cases. Misdiagnosis of benign myoma of 14% is probably due to the vast heterogeneity of both benign and malignant uterine mesenchymal lesions as described by the pathologies, in particular the epithelioid and myxoid variant of leiomyosarcomas. In disagreement with Exacoustos et al. the vascularization of leiomyosarcomas was not abundant in about 35% of cases published by Ludovisi et al, this difference is probably due to the different size of the sample. The poor vascularisation could be justified by the presence of extensive internal necrosis. Solid tissue necrosis, defined as “cooked appearance”, should be sought whenever a lesion appears poorly vascularized.

Fan shading is a constant feature of leiomyomas. In our opinion, the most important aspect that emerges in the series published by Ludovisi et al. is the absence of the shadow cones in particular the absence of fan shaped shadowing in all types of sarcomas, especially in leiomyosarcomas, in according to Bonneau et al.

In conclusion, all large inhomogeneous uterine lesions with irregular cystic areas, without shadows and calcification in symptomatic patients especially with abnormal vaginal bleeding suggests malignancy. Preoperative diagnosis of sarcomas remains difficult. The correct preoperative diagnosis is essential for correct treatment. All mesenchymal lesions presenting dubious ultrasound features and clinical symptoms should be evaluated by experienced staff and only selected mesenchymal lesions should be sent to the reference centers.

The correct ultrasound diagnosis of benign and malignant lesions of myometrial tumors would be very interesting to evaluate with a prospective study especially stressing the evaluation of the shadow cones however, the rarity of these tumors makes it difficult to carry out this project.

Provenance and Peer Review: This article was commissioned by the editorial office, Gynecology and Pelvic Medicine for the series “Uterine Sarcomas”. The article has undergone external peer review.