A rare metastasis of cervical cancer to the sigmoid colon: a case report and review of the literature

Despite the efforts of human papillomavirus (HPV) vaccination, cervical cancer is a common malignant tumor, and the incidence rate is still the fourth worldwide among female tumors. There are estimated 604,127 new cases and 341,831 deaths in 2020 (1), accounting for a large proportion of cancer deaths worldwide (2,3). Although significant advancement in early screening has provided a reliable reference for the early diagnosis and treatment of cervical cancer, up to 20% of early-stage cancer relapse in 5 years, with a poor prognosis and significantly high mortality rates (4). Direct local extension and lymphatic dissemination are the main ways of metastasis. The lung and paraaortic nodes are the most prevalent sites of distant metastases (5). The brain, skin, spleen, muscle, and gastrointestinal tract are rare sites that have only been described in a few cases (6-10).

We reported a case of sigmoid colon metastasis as the first site of recurrence cervical cancer, arising one and a half years after primary surgical therapy, which was successfully treated by surgery. This case provides several lessons for the choice of surgical treatment on adjuvant treatment in patients with early-stage cervical cancer. Additionally, based on current literature, we provide information about the management of cervical cancer patients, hoping to shed light on potential therapy options. We present the following case in accordance with the CARE reporting checklist (available at https://gpm.amegroups.com/article/view/10.21037/gpm-22-13/rc).

We reported a 49-year-old woman admitted to our hospital with a complaint of vaginal bleeding for 4 months in November 2018. All procedures performed in this study were in accordance with the ethical standards of the institutional and/or national research committee(s) and with the Helsinki Declaration (as revised in 2013). Written informed consent was obtained from the patient for publication of this case report and accompanying images. A copy of the written consent is available for review by the editorial office of this journal. One month ago, the patient went to a local hospital and received gynecological physical examinations. There was a mass on her cervix. The HPV detection showed HPV16 was positive. A biopsy was done under colposcopy, and the pathological diagnosis was cervical squamous cell carcinoma. The patient sent the pathological tissue to our hospital for consultation. The pathological results were consistent with the local hospital.

The menstrual cycles of the patient were regular in the past. Four months ago, she had abnormal vaginal bleeding without abdominal pain, abdominal distension, lower limb edema, flank pain, and sciatica. The medical and surgical history was not special except for asthma controlled well. The reproductive history was gravida 2 para 1 (G2P1).

There were no pathological signs of metastasis before surgery. The patient did not have the symptoms of pelvic sidewall invasion (limb edema, flank pain, and sciatica), bladder invasion (vesicovaginal fistula), and rectum invasion (rectovaginal fistula). On gynecological physical examination of bimanual examination and rectovaginal examination, she was found to have a mass less than 4 cm confined to the cervix with contact bleeding. The uterus and parametria were flexible, and vaginal fornix was not involved. Besides, there was also no metastasis evidence on imaging evaluation. The chest X-ray showed normal. The abdominal and pelvic enhanced computed tomography (CT) scanning showed the inferior muscle layer and cervix of the uterus were heterogeneous enhanced. No significant thickness of the parametrial tissue was observed. In addition to the uterus, there was no evidence of other lesions and enlarged lymph nodes. The patient was clinically diagnosed with stage IB2 cervical cancer according to the International Federation of Gynecology and Obstetrics (FIGO 2018). The patient chose radical hysterectomy, salpingo-ovariectomy, bilateral pelvic lymphadenectomy, and para-aortic lymph node sampling through the laparoscope. During the operation, we carefully examine the abdomen and pelvis, including the small intestine, omentum, peritoneum, colon, sigmoid colon, and other organs. The peritoneal surfaces were noted to be smooth, and no visible lesions were found in other tissue. The operation went smoothly, and the uterus with the lesion was completely taken out through the vagina. The lesion residual was R0.

The postoperative pathological diagnosis is cervical moderately differentiated squamous cell carcinoma with one-third cervical stromal invasion. The tumor size was 3.5 cm. The operation margins, including parametrial extension, ligaments and vagina were all negative. There was no lymphovascular invasion. No lymph node metastasis was found in the bilateral pelvic and para-aortic lymph nodes. Immunohistochemistry showed CK5/6+++, P16++, P63++, P40++, and Ki67 was 90% positive. After the operation, she did not receive radiotherapy or chemotherapy. The patient was discharged in a week and relatively good health. The patient had poor compliance and an irregular follow-up. Six months later, gynecological examination and cytology of the vaginal cuff revealed no evidence of recurrence.

One and a half years later, the patient was admitted to a local hospital with repeated abdominal pain and vomiting for about one month. An emergent CT scan revealed acute intestinal obstruction and sigmoid lesions. A sigmoid tumor was suspected to be the cause of the obstruction. She underwent radical resection of the sigmoid tumor. The postoperative pathological diagnosis was squamous-cell carcinoma of the sigmoid. Considering the patient history and the tumor pathologic type, it was thought to be a sigmoid metastasis from cervical cancer. However, the patient came to our hospital again, and no recurrent signs were found in the vaginal cuff and the pelvic cavity by our examination, including HPV DNA test, ThinPrep cytology test (TCT) test and pelvic CT scan. The timeline of disease progression was shown in Figure 1. 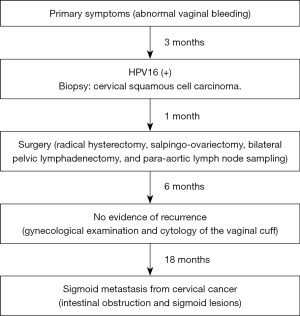 Cervical cancer is one of the most common gynecological cancers, with higher incident rates and mortality in developing countries. Implementing HPV vaccines and early detection including Pap smear, liquid-based cytology and HPV test have markedly reduced the incidence and mortality of cervical cancer in part of the world (11). However, recurrence or distant metastasis poses a considerable challenge due to limited therapeutic options and poor prognosis. Pelvic is the most common site of recurrence (12). Distant metastasis of recurrences involves the lungs (69%), bone (21%), gastrointestinal tract (14%), liver (13%), brain, and other sites (5). Unusual metastases have been reported in the skin (6), thumb (13), spleen (14), kidney (9), and skeletal muscle (15). Colonic metastases, especially isolated sigmoid colon metastasis of cervical cancers, are exceedingly rare (16), probably due to relatively short intestinal segment. To date, only 6 cases of sigmoid colon metastasis are reported in the literature, and three are isolated (16-21). Table 1 provides a simple review of the published cases of rare metastases from cervical cancer in the English literature, including the 6 cases of sigmoid colon metastasis (6,8,9,13-27).

Clinical features of reported patients with recurrence from cervical cancer

Retrospective data suggest that minimally invasive surgery (MIS) techniques (standard laparoscopy or robotic-assisted laparoscopy) cause less blood loss, shorter hospital stay, and lower postoperative complications (28,29). Hence, this patient chose to be treated with laparoscopic radical hysterectomy, salpingo-ovariectomy, bilateral pelvic lymphadenectomy and para-aortic lymph node sampling. However, the perceived oncologic safety of MIS has been challenged by the LACC trial. The large phase 3 randomized trial involved 631 patients with stage IA1 (lymphovascular invasion), IA2, or IB1 cervical cancer during the 2008–2017 period, comparing the recurrence and overall survival of MIS and open surgery. The results showed that minimally invasive radical hysterectomy had shorter overall survival and lower rates of disease-free survival than open surgery (30). Similar findings were reported in a retrospective study conducted by Melamed et al. published on The New England Journal of Medicine (NEJM) (31). Moreover, Uppal et al. confirmed that early-stage cervical cancer patients undergoing minimally invasive radical hysterectomy had inferior recurrence-free survival (32). Another single-institution, retrospective study including 582 early-stage patients suggested a high risk of peritoneal recurrence in the MIS group compared with the abdominal radical hysterectomy group (33). Regardless of the limitations of the trial design, these unexcepted results could be attributed to several potential factors, such as a less extent of operative field exposure than open surgery, the use of uterine manipulator and CO2 gas insufflation causing the propensity for tumor spillage, and incorrect manipulation (32,34). In the present case, the reasons for sigmoid colon metastases are not clear. The hypothesis that MIS caused tumor spreading could not be ruled out. Considering that laparoscopic surgery is currently controversial, surgeons performing MIS should have great proficiency and be meticulous during the surgery. Importantly, the tumor-free principle should be insisted on. The experienced surgeons should evaluate the patient thoroughly and resect all lesions as possible.

Furthermore, routine post-treatment follow-up visits are advised every 3–4 months for the first 2–3 years, then at 6-month to 5-year intervals, and annually for life (12). History taking, physical examinations and auxiliary examinations should be performed carefully to check the treatment complications at each visit. Hence, in addition to detecting the vaginal stump regularly by HPV testing and cervical cytology, CT or magnetic resonance imaging (MRI) are also recommended to evaluate the distant region relapse in some special circumstances such as involved high pelvic lymph nodes (12). Once the rectal extension is suspected, proctoscopy may be considered. However, this patient had poor compliance and an irregular follow-up.

Cervical cancer had multiple metastasis routes, including direct extension, lymphatic channels and hematogenous route (35). The patient may have distant metastasis without infiltrating adjacent tissues. We reported an unusual case of a patient presenting with sigmoid obstruction caused by tumor metastasis from cervical cancer. Clinicians should pay more attention to the metastatic sites of cervical cancer, especially some rare sites.

Funding: This work was supported by Department of Science and Technology of Sichuan Province (funding number: 2018JY0609).

Reporting Checklist: The authors have completed the CARE reporting checklist. Available at https://gpm.amegroups.com/article/view/10.21037/gpm-22-13/rc

Conflicts of Interest: All authors have completed the ICMJE uniform disclosure form (available at https://gpm.amegroups.com/article/view/10.21037/gpm-22-13/coif). FF and XH serve as unpaid editorial board members of Gynecology and Pelvic Medicine from June 2022 to May 2024. The other authors have no conflicts of interest to declare.

Ethical Statement: The authors are accountable for all aspects of the work in ensuring that questions related to the accuracy or integrity of any part of the work are appropriately investigated and resolved. All procedures performed in this study were in accordance with the ethical standards of the institutional and/or national research committee(s) and with the Helsinki Declaration (as revised in 2013). Written informed consent was obtained from the patient for publication of this case report and accompanying images. A copy of the written consent is available for review by the editorial office of this journal.