Vaginal foreign body generally occurs in young girls. Children are in the period of exploring the body, may be curious to put small toys and other foreign bodies into the vagina. They often present for bloody, purulent or smelly vaginal discharge. Because the exact history is difficult to obtain and the disease is relatively rare, unless doctors have experience in this field, vaginal foreign bodies in young girl are easy to be ignored, resulting in misdiagnosis and missed diagnosis. If not removed in time, long-term retention of vaginal foreign bodies can cause serious consequences, including vaginal adhesion, stenosis, and sinus tract (1-3).

With the popularity of vaginoscopy which allows evaluation of the entire vaginal canal and removal of retained foreign bodies without need for no more trauma or even no trauma. Vaginohysteroscopy was a patient-friendly technique for outpatient hysteroscopy. Hysteroscopy with a vaginoscopic approach using a 5-mm rigid hysteroscope with single inflow channel, and normal saline for distension. We can use hysteroscopy to complete vaginal examination without damaging the hymen, that is, non-invasive vaginal endoscopy technology, to avoid the speculum examination, and foreign bodies can be removed at the same time. Vaginal endoscopy can usually be done quickly and smoothly, but occasionally complex and tricky situations may be encountered. Recently, we treated a rare case of vaginal foreign body retention resulting in complete vaginal atresia, and we conducted retrospective analysis to summarize clinical experience. We present the following case in accordance with the CARE reporting checklist (available at https://gpm.amegroups.com/article/view/10.21037/gpm-22-16/rc).

This patient was an 11-year-old girl before menarche, no sexual life history. Three years ago, the child was admitted to another hospital with recurrent smelly vaginal discharge. The child denied a history of vaginal foreign body insertion. Genital examination revealed erythema around the vulva with yellowish discharge. A digital rectal and ultrasound examination were not carried out. She was treated with antibiotics for vulvovaginitis. However, there was no substantial therapeutic effect. Two years ago, the patient was presented to our hospital for recurrent vaginal discharge. Color Doppler ultrasound indicated that there was hyperechoic mass in the vagina and foreign body was suspected with surrounding tissue wrapping. A vaginal endoscopy was performed in the outpatient department. During the operation, a soft mass of 0.5 cm was found on the left side of the vagina with unknown nature, and a purple plastic ring of about 1 cm was found on the posterior wall (Figure 1). Those two foreign bodies were removed successfully in vaginal endoscopy. The soft tissue mass turned out to be a walnut. We compared the foreign bodies with the item which was provided by the patient’s parents and found the foreign body matched it exactly. However, postoperative symptoms did not improve significantly. Her symptoms worsened 6 months ago, and she began to develop bloody discharge. Re-examination of color Doppler ultrasound suggested that a fluid mass of 4.3 cm × 4.3 cm × 4.3 cm was found in the cervical canal, with hyperechoic cord-like mass in the cervical canal. The possibility of foreign body in the cervical canal was considered. The child denied inserting a foreign body after previous surgery. After admission, vaginal endoscopy was performed again. During the operation, it was found that the upper vaginal segment could not be reached because of dense adhesion and complete atresia (Figure 2). Under the guidance of ultrasound, the abscess cavity was cut through the relatively weak part of adhesion, and about 80 mL of abscess was sucked out. The tissue in the abscess cavity was hyperemic and edema, and a plastic pen cap about 4 cm long was wrapped by hyperplastic granulation (Figure 3). After the cap was removed, the abscess cavity was repeatedly washed and filled with a gauze to stop the bleeding. The patient was followed up 6 months after the operation, abnormal vaginal discharge did not occur again. 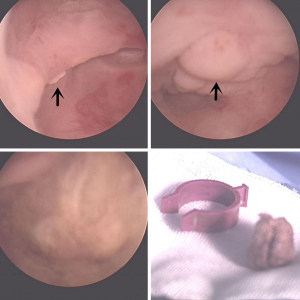 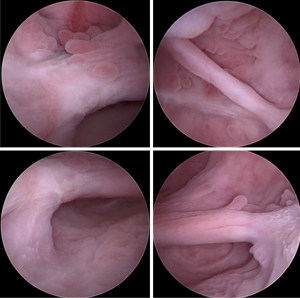 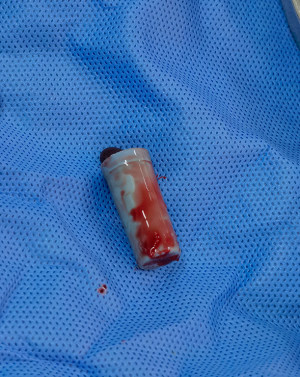 Figure 3 A plastic pen cap about 4 cm long was wrapped by hyperplastic granulation.

What is noteworthy about this case is that the child underwent vaginal endoscopy to remove the foreign bodies in our hospital 2 years ago, but the postoperative symptoms were still existing. A second vaginal endoscopy revealed that a plastic pen cap had caused a closed abscess in the upper vagina. Although the possibility of inserting a foreign body again could not be ruled out, the previous operation might not have removed all the foreign bodies. This study was approved by the Institutional Research Ethics Committee of West China Second University Hospital. All procedures performed in this study were in accordance with the ethical standards of the institutional and/or national research committee(s) and with the Helsinki Declaration (as revised in 2013). Written informed consent was obtained from the patient’s legal guardian for publication of this case report and accompanying images. A copy of the written consent is available for review by the editorial office of this journal.

As previous literatures reported in our hospital, the average operation time was 17 (range, 5–80) minutes, only three cases had difficult operation and poor prognosis, including our case, and all of the three patients had complete vaginal atresia caused by long-term vaginal foreign body retention. Among the three cases, an 11-year-old girl developed complete vaginal atresia due to disk battery retention for 5 years and underwent vaginal surgery to separate the adhesion and remove the foreign body. However, because the little girl did not cooperate with the placement of the vaginal mold after surgery, the vagina repeatedly adhered after surgery, and the menstrual blood could not flow out after menstruating. So far, she has undergone five vaginal adhesion operations. And another case was a 27-year-old female who had a film cover retention in the vagina for 14 years. In the past 10 years, she had periodic vaginal smelly and bloody secretion, accompanied by lower abdominal pain and fever. The patient had regular menstruation, dysmenorrhea and normal sexual life. The patient had undergone foreign body removal at another hospital several years ago, but the operation failed, and the foreign body was not removed.

Eleven patients were initially diagnosed with vulvitis (45.8% of symptomatic cases), with poor anti-inflammatory response and recurrent symptoms. Two cases of foreign bodies located near the vaginal opening were directly removed by forceps, and one case of foreign body was pushed to the vaginal opening during the digital rectal examination and removed. One case was a sexually active adult and underwent vaginal surgery to remove the foreign body. The other 27 patients underwent vaginal endoscopy, among which one child complained that small beads had been inserted into the vagina, but no abnormalities were found in vaginal endoscopy and postoperative color ultrasound examination. Presumably the beads fell off before surgery. In another two cases, the vagina was found to be completely closed in vaginal endoscopy, and the foreign body was removed by vaginal surgery. There were a variety of foreign objects, including small plastic toys, blocks, cotton, disk batteries, film covers, fruit pits, pen caps, hairpins, and crayons.

Usually, vaginal endoscopy can remove foreign bodies quickly and smoothly as previous literatures reported, difficult surgery for complete vaginal atresia is excluded (4). From previous reports, it can be seen that although long-term vaginal foreign bodies may not affect menstruation or sexual life, they may cause symptoms such as vaginal atresia, vaginal discharge, vaginal smell, and even more serious complications. It is necessary to solve vaginal foreign bodies in a timely and effective manner. And in our cases, one of the patient the foreign body was found to be located at the right side of the posterior fornix and surrounded by granulation tissue. The adhesive closed posterior fornix was cut open, outflow was malodorous, and a cylindrical film cover about 7 cm long was removed. Six years after the removal of the foreign body, the patient underwent right ureteral bladder reimplantation and right adnexectomy due to severe pelvic endometriosis, right ovarian sac, right upper ureter dilation, and severe hydronephrosis of the right kidney.

Therefore, for girls with recurrent abnormal vaginal secretions and poor anti-inflammatory treatment effect, doctors need to be alert to the possibility of vaginal foreign bodies. In addition to careful collection of the history, attention should be paid to the genital and digital rectal examination. As a convenient and economical examination method, ultrasound can reveal most suspicious vaginal foreign bodies, there is still a possibility of missed diagnosis due to the doctor’s experience, ultrasound instrument, children’ uncooperation and other reasons (5). If necessary, multiple color Doppler ultrasound examination, X-ray and CT can improve the diagnostic accuracy. For those who are highly suspected of having vaginal foreign bodies, vaginal endoscopy should be performed promptly after careful communication with the children’s families. In vaginal endoscopy, the whole vagina must be carefully examined to remove all foreign bodies, so as to avoid serious physical and mental sequelae caused by long-term foreign body retention. In our case report, the 11-year-old girl underwent two endoscopic treatments for vaginoscopy. The second removal of a vaginal foreign body cannot be determined whether it was left in the vagina for the first time because of vaginal adhesions or re-inserted. If it is not finished for the first time, then this may be the cause of vaginal atresia. If an ultrasound is reviewed immediately after the first surgery or performed directly under ultrasound monitoring, the possibility of foreign body residue may be reduced. This should be something worth thinking about.

This article summarizes the vaginal foreign body cases in our hospital from 2005 to 2021, analyzes and summarizes them, and provides more experience for the clinical diagnosis and treatment of this disease in the future, which can avoid missed diagnosis and misdiagnosis. However, because it is a retrospective study, it also has certain limitations (Appendix 1).

Funding: This study was supported by grant from the National Natural Science Foundation of China (No. 82101754).

Reporting Checklist: The authors have completed the CARE reporting checklist. Available at https://gpm.amegroups.com/article/view/10.21037/gpm-22-16/rc

Conflicts of Interest: All authors have completed the ICMJE uniform disclosure form (available at https://gpm.amegroups.com/article/view/10.21037/gpm-22-16/coif). XT serves as an unpaid editorial board member of Gynecology and Pelvic Medicine from October 2022 to September 2023. The other authors have no conflicts of interest to declare.

Ethical Statement: The authors are accountable for all aspects of the work in ensuring that questions related to the accuracy or integrity of any part of the work are appropriately investigated and resolved. This study was approved by the Institutional Research Ethics Committee of West China Second University Hospital.All procedures performed in this study were in accordance with the ethical standards of the institutional and/or national research committee(s) and with the Helsinki Declaration (as revised in 2013). Written informed consent was obtained from the patient’s legal guardian for publication of this case report and accompanying images. A copy of the written consent is available for review by the editorial office of this journal.