Dr. Tapisiz was born in Ankara in 1977 and graduated from Ankara University Faculty of Medicine in 2000. He had residency training in Obstetrics and Gynecology in Zekai Tahir Burak Women’s Health Education and Research Hospital, Ankara, Turkey between 2001-2006. After completing his compulsory service at Kızılcahamam State Hospital, he started to work as an Assistant Professor at Etlik Zubeyde Hanim Women’s Health Training and Research Hospital, Ankara in 2010. In 2012, he was trained on Minimally Invasive Gynecologic Surgery and Robotic Surgery at the University of Texas Medical Branch. He completed his PhD in Medical Pharmacology at Gazi University Faculty of Medicine in 2014. In 2016, he was awarded the MIG Surgeon Diploma by successfully completing the Minimal Invasive Gynaecological (MIG) Surgeon Level Program under GESEA (Gynaecological Endoscopic Surgical Education and Assessment). He became an Associate Professor of Obstetrics and Gynecology in 2013 and has over 100 articles and over 1000 citations in national and international journals (h-index: 17 [12.11.2020]). He is still working as a chief of Obstetrics and Gynecology Department in Ankara Guven Hospital, Turkey and continuing his scientific studies.

Sadiman Kiykac Altinbas, MD, is an associate professor in the Department of Obstetrics and Gynaecology at Güven Hospital in Ankara. Dr Altinbas received her undergraduate and medical degree from Ankara University Faculty of Medicine in 2001. She completed her OB/GYN residency training at Etlik Zübeyde Hanım Women's Health Training and Research Hospital in Ankara in 2007, followed by Minimally Invasive and Robotic Gynecological Surgery training at Columbia University St. Luke and Roosevelt Hospitals in New York, in 2013.

She completed Assisted Reproductive Therapy (IVF) certification training in Ankara in 2013. She received the Gynecological Surgery diploma programme within the scope of GESEA (Gynecological Endoscopic Surgical Education and Assessment) in 2016.

She is the author of more than 70 publications in peer-reviewed journals and continuing her scientific studies.

Disclosure:
The series “Uterine Fibroids: Various Aspects with Current Perspectives” was commissioned by the editorial office, Gynecology and Pelvic Medicine without any sponsorship or funding. Omer Lutfi Tapisiz and Sadiman Kiykac Altinbas are serving as the unpaid Guest Editors for the series. 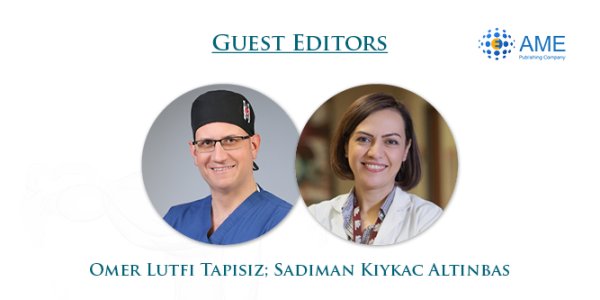